How old is St George’s Well at Minsteracres?

As St Georg’s Day approaches I thought it would be interesting to cast one’s attention to wells dedicated to the saint. Jeremy Harte in his 2008 English Holy Wells Sourcebook refers to six wells dedicated to St George: Wilton, Cullompton, Hethe, Holsworthy, Kirkwhelpington and Stamford. He does not include Padstow’s St George’s Well because he does not include Cornwall in his survey. Interestingly though he misses a St George’s Well at Minsteracres which means despite a sparse distribution across the country, two exist in Northumberland.

It thus begs two questions. Why does England’s patron saint have so few wells dedicated to them? And how authentic then are the St George’s wells which are known?

One of the most interesting is that at Minsteracres at Barley Hill Northumberland. The Historic record notes simply:  Park with gate lodges, water features, a well and a chapel. The well itself lies in a shrubbery enclosed in a small piece of low stone walling on one side rubble built behind and dressed at the front. The spring arises in a circular chamber near the walling in a pavement area which is lower and enclosed. There is often water in the well but no perceivable flow. The brickwork looks Victorian and the site is marked on the first series OS map but significantly perhaps not in italics suggesting no great age. 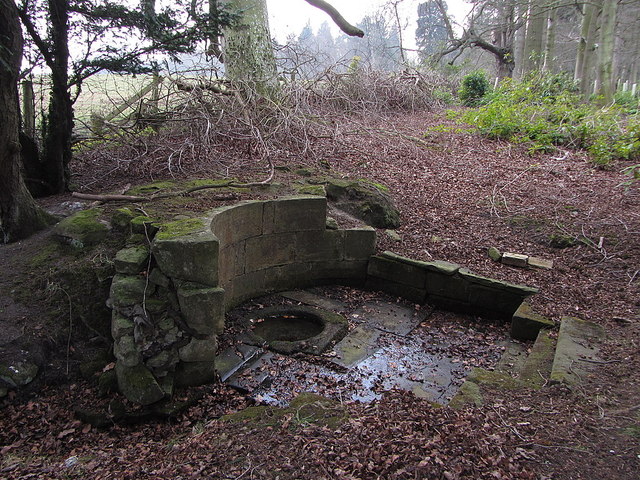 © Copyright Andrew Curtis and licensed for reuse under this Creative Commons Licence.

The estate is mediaeval but it is likely to be two origins to the well. Firstly it could link back to the family who owned the estate in the 1800s, the Silvertop family. They were devout Catholics, who made considerable fortune from coal mining but were persecuted for their faith. George Silvertop is likely to be the first one responsible. He travelled widely and brought back a number of trees and plants from his journeys to beautify the estate. Did he improve a spring and dedicate it?  The second likely person is his nephew Henry Charles Englefield, who inherited the estate and adopted the family name and significantly  built the mansion’s  private chapel which became St Elizabeth’s Catholic parish church in 1854. Did he need a spring for baptism water and liturgical processes – if so why George and not Elizabeth?

The final group of people were those who took over the estate after the second world war: Friar Colum Devine of the Passionist Order, who transformed Minsteracres into a monastery and retreat centre which opened in 1967. However, despite a Catholic order being the most obvious choice for dedication their taking over of the estate is too late as it had already appeared on the OS map by that point. My person guess is the Henry Charles Englefield but I am sure that a deeper examination of the records may reveal something and perhaps explain why this saint was adopted. And was it an earlier holy well forgot and restored or just a simple spring?

So why are St George’s Wells so scarce? One would have thought being England’s patron saint would have been popular enough to have a large number of dedications but that it a way underlines how wells are named and why. Did the cult of St George arrive too late to see a wide spread adoption of his name? Indeed of the 6 wells mentioned by Harte on Wilton’s has any authenticity being recorded as mediaeval. But of course this did stop the wider adoption of St Anne in the 14th century. Of course that in itself may suggest why certain saints had better ‘healing traditions’ and saintly importance in the pantheon of saints. Equally often wells adopted saints names due to an association of the saint with water and healing. St George does not obviously appear to have either.