Readers of Source will need no reminding of the numerous holy wells lost or destroyed through neglect and vandalism. Others, still extant, have become obscure and do not appear in lists such as Francis Jones’ Holy Wells of Wales or Myrddin Fardd’s Llén Gwerin Sir Gaernarfon, l However a familiarity with sources of local history may reveal such sites of interest. This was the case with two holy wells at or near Bangor which I have been able to locate with but a little effort, and some help.

The first is Ffynnon Fair (St Mary’s Well), in the parish of Llan-fair-is-gaer near Bangor. The old parish church stands on the shore of the Menai Straits, a short mile west of Y Felinheli. This spot was formerly an important crossing point, served by a ferry.2 The well of Ffynnon Fair is about 500 yards south-east of the church, where a noticeable scarp marks a geological fault of some severity. The O.S. Grid reference is SH 5053 6564.

Until very recently a road ran from the church directly past the well and thence up the slope towards higher ground. This would have linked the ferry to the old Roman road from Chester to Caernarfon. Continuing southwards, the track would have passed through Eryri LSnowdonial to Beddgelert, and towards Cardigan Bay and South Wales.3  Beddgelert Priory owned land in Llanfair-is-gaer and in the Anglesey parish of Llanidan directly opposite. Beddgelert Priory was similarly dedicated to the Mother of God, and had a Ffynnon Fair.4 I do not know the date of Llanfair- is-gaer’s foundation, but as Llanfair yn Arfon it was known to the fourteenth-century compilers of the Triads of the Isle of Britain in connection with the myth of Henwen the sow.5 The first written mention of the well which I have seen is a reference to ‘Cae Uwchyffordd alias Cae Ffynnon Fair’ in a Llanfair Hall Estate deed dated 1458 and now at the National Library in Aberystwyth (Llanfair Estate D2).6 The name appears subsequently in other estate documents, but not in any well-list that I know of, and not in the Royal Commission Inventory.

My attention was drawn to it by a chance reference in a papur bro (community newspaper) to Allt Ffynnon Fair as the name of the above- mentioned scarp. Subsequent enquiries established that the well is locally known, being noted for its cold, clear water, available at all seasons. This preservation of the well’s name amongst Llanfair’s inhabitants since before the Reformation reflects the tenacity of local oral tradition, and the importance of a dependable water supply.

Had the site come to my attention two years ago, I could have reported concerning the water’s potability. However those planning and constructing the Felinheli By-pass have since seen fit to incorporate the well in the road’s surface water drainage scheme. The well is now enclosed in a concrete sump, and access denied by a heavy iron grid. The water rises and falls according to rainfall, but for the most part looks stagnant and unappealing. Even where it is accessible, there are no means of determining what part of the sump’s content is spring water, and what part roadwork runoff.

Nearby ground tends to become waterlogged after rain, and investigation proved that a layer of stony clay,  probably glacial, lies about a foot below the surface. Any hole dug quickly fills with water, but this is probably soil runoff rather than an upwelling. To strike the water table, one would probably have to dig several feet through the clay: so any question of restoration remains speculative. The site of the well is easily accessible from the road, but the nearby field is private property and permission should be sought at Crug Farm before venturing there. 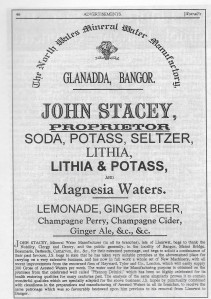 This well is (or was) situated about a mile and a half west of the centre of Bangor, behind the suburb of Glanadda. There is no mystery concerning its general location, old Ordnance maps naming the area as Cae Ffynnon Deiniol St Deiniol’s Well Field). Francis Jones refers but vaguely to wells near Bangor.8 The name Deiniol or Daniel appears in several place names at or near Bangor, as would be expected. There is Perllan Cae Daniel, Porth Daniel, Gwely Deiniol and Cae Ffynnon Ddeiniol.9 The well site stands at the northern end of what was a wooded ravine, in rough ground. The ravine is referred to in documents by various names, including Nant Gwtherin, Nant y Fferam Nant Uffern, Nant Offeirin and Nan yr Offeren, i.e. the Ravine of the Liturgy (10) The latter version appears in Garmon Jones’ toponomical notes of 1951 11 as being favoured by the the inhabitant of nearby Nant Farm, who said that he had ‘a letter from London’ so addressed. If correct, it would certainly be interesting in the present context: but Welsh toponomy is bedevilled by ill-informed speculations concerning the ‘true meaning’ of place-names. Any of these versions, or none of them, could be the ‘correct’ one. Nowadays the area is simply known as Nant. Somewhat  behind this ravine are three fields called ‘Llan’ (i.e. enclosure or church), where another aged informant interviewed 1951 said there was ‘a very old rum .12 There are very many wells in the  Bangor area, but why this one should be specifically linked with St Deiniol, I cannot tell; no legend or  tradition has survived. As with Ffynnon Fair above, the site is very near  to a road linking the Menai shore at Y B011h (the present George Hostel site, and an important crossing point)  to the old Roman Road. It was much used by drovers.13 The first written reference to Cae Ffynnon Ddeiniol of which I know is in an episcopal rental of 1647.14 The land was church property, specifically that of the bishop of Bangor, and remained so until the middle of the last century. It appears to have been regarded as inalienable, and was only sold off when mid-nineteenth century legislation enabled church land to be so disposed of. In any case, such poor ground would appeal little to the rapacious.

The upper part of the ravine, noted as being part of Cae Ffynnon Ddeiniol, was sold to the enterprising James Smyth Scott in 1843 and a reservoir was built there to provide Bangor with a dependable water supply. This was expanded in 1845, but then abandoned as inadequate. A brewery was established at the lower and of the field by c. 1867,15 utilizing water from either the research

By that time the land-hungry Penrhyn Estate was showing interest, and maps then drawn up are to be found at the National Library (Church in Wales, B/Maps/II) and the archives at University College Bangor.16 The latter is particularly interesting as showing two wells as small rectangles, possibly indicating that they were stone-lined. One at O.S. Grid Reference SH 5743 7101 is in the middle of the area named Cae Ffynnon Daniel. The other is shown in an adjacent field (at O.S. 5752 7103), named Cae Ffynnon. The Penrhyn Estate acquired the land in two purchases in 1871 and 1872. Worrall’s trade directory of c.1880 contains an advertisement for a soft drinks manufactory which replaced the brewery. The advert makes specific mention of the renowned health-giving properties of St Deiniol’s Well: and hyperbole apart, may indicate the proprietor’s awareness of a local tradition concerning the water’s healing powers.

A tradition now lost, alas. The manufactory closed by the middle of this century, but the name ‘Cae Ginger Beer’ has stuck to the field. The ravine was used as a dump until about 1965, and is largely filled The land, having been owned by Bangor City Council and Arfon Borough Council, now belongs to the Lowry family of nearby Hendrewen Farm. With their permission I visited the site following rain in November.I almost immediately came across a slate-lined structure half buried and mud-chocked of which I had high hopes. But a little digging revealed it to be a conduit, not a well, and probably intended to convey water to the brewery, It contained a few shards of glazed nineteenth-century pottery, and the remains of a glass bottle. It was also obvious that the site had changed much since the last century: field boundaries have altered, and a quarry which would have provided a useful point of reference with the old maps has been filled and has disappeared under scrub. Dirty water flows strongly across the field from the ravine/dump, and then disappears down an old concrete drain sited roughly where I had imagined one of the wells, i.e. the one in the middle of the 1872 map, to be.17

The well may have suffered the same fate as Ffynnon Fair, and have been incorporated into some past drainage improvement scheme. But further study of the available maps leads me to suspect that I may have been ten or twenty yards out in my guess of where the spring should be, and that a rather unappealing area of muddy scrub may prove rewarding. Another visit during slightly drier weather may therefore be in order.

As for the second well, the landowner tells me that it was filled in only about two years ago. It was walled, with steps and a grating, with a public right of access to it. It fed the same stream as the other above-mentioned. It could be as viable a candidate for the title of ‘Ffynnon Ddeiniol’ as the other, given that it was obviously a maintained structure sufficiently important to be specifically mentioned in land deeds, and given that the boundaries of Cae Ffynnon Ddeiniol may have changed and shrunk over the years. At present therefore I cannot say which of the two wells is Ffynnon Ddeiniol; but the information gleaned so far is sufficient fuel for further research. I shall inform readers of any progress.18