If you are in Barcelona or anywhere in the Costa Brava or Dorado and are looking for a curious place off the beaten track which has that real Catalonian feel and have an interest in healing springs Caldes de Malavela is a must. It is a town which has been attracting seekers of healing waters since the Roman times and is still a major spa town with waters rich in in sodium chloride and sodium bicarbonate and are thermal arising at around 60°C,

In the middle of the 1st century B.C., the Roman settled in the area and constructed the baths. Being located close to the Via Augusta and many would have stopped here for the hot water and thus a Roman  town developed. It was in 1897-1902 that archaeologists revealed the remains of the baths. The complex was a simple one, being composed of a central pool surrounded by rooms given over to curative treatments. It was believed to be a simple building, lacking any detail and had a ten metre rectangular swimming pool with changing rooms and massage rooms.. The water itself was delivered to the baths via an aqueduct from Ànimes hill although there is no sign of water in the site now one can see how it flowed. through.

“Sacred water spring The central room in the east wing is one of the most important spaces in the thermae due to the presence, in Roman times, of the thermal water spring that was the raison d’étre of the site. The water emerged from the lower part of the east wall, at the north end, from where it was channelled diagonally into a small square regulator controlling the flow into the pipe that supplied the natatio. The curative and therapeutic properties of the water made this room a sacellum (small sacred space). On the north wall, we can still see the remains of a small altar flanked by two affixed pilasters, which must have housed one or several images of healing divinities. These most likely included Apollo, whose cult has been documented in Caldes from inscriptions found in the locality. A bench on the south wall provided seating for visiting devotees. Furthermore, this was the only room in the whole thermae enclosure where the walls were stuccoed and decorated with polychrome paintings. Later on, but still in the Roman era, several alterations were made to this room; these mainly consisted of walling up the three accesses from the ambulacrum, and adding a small piscina or water deposit in its interior. The altar was no longer used. The spring and the regulator, however, continued to operate as before. In the medieval period, all these structures were “buried” under two new small pools. The water supply now emerged from a different point located one metre higher on the same wall; the pools were drained through a hole in the south wall leading to the adjacent room, which gradually became covered in calcareous concretion.

By the end of the 4th Century the site being developed as a castle and then converted into a hospital for the poor.

What’s in a name? Caldes translates in Catalan as hot mineral spring. This enables non-Catalan speakers to identify spas in the area. The general agreed name of the Roman site was thus Aquae Calidae although some have called it Aquis Voconis. Its modern name Caldes de Malavella is interesting. This second part of the name – “de Malavella” – comes from a local legend, of a local “bad old woman” who lived in the now-ruined castle just outside town. Thus “Malavella” in Catalan comes from two words: mala (bad) and vella (old woman). Thus “The Thermal Springs of the Old evil one”! The story dates back to 1057 which may suggest it has an ancient pagan origin? Was it an attempt for the Christians to demonise the focus of a local cult. Quite often of course, springs are associated with female deities, and it is interesting to consider the Scottish tradition which one assumes descends from the Celtic tradition where there is of course the Old Hag or Cailleachan. This might at first be irrelevant but is worth considering that this region was settled by the Celts too in 1000 – 300 BC in two migratory waves: 900 BC and 700 – 600 BC. It seems likely that this does such record a Celtic or even Roman tradition. Mind you if the intention was to demonise the deity has not really worked as the Evil Old one is everywhere and whilst I was there I was privileged to see a parade of Giants, where she featured prominently.

All around the town can be found three natural hot mineral-medicinal fountains: La Mina or Raig d’en Mel, Sant Narcís and Bullidors. In some cases such as La Mina these waters were utilised for safareigs or municipal cloth washing areas and indeed I was informed at the museum that people still use them although generally it was around the 1960s that they generally fell out of favour. However, the Font Raig d’en Mel arises at the base of a large wall of rubble and feeds quite modern looking washing areas.

Around the town there are other springheads/wells- Font de Bullidors of the kettles and Font des Saint Narcis. Both well preserved in a modern setting, although the former is dry. Both lie close to the baths so presumably their source. The later well appears to be a holy well named after the patron saint of Girona.  On the subject of holy wells, there is also an unnamed and unheralded well under the church, which surely is something significant but not mentioned in the town maps or guides. There is also the modernist font of Font de la Vac and associated music room and conduit. 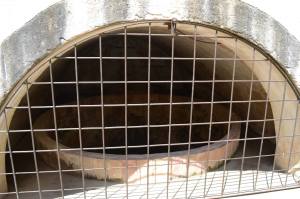 The use of the water for medicinal purposes it appears that this did not start to happen until 19th. Three spring sites were tapped: El Puig de Sant Grau (utilising four springs), El Puig de les Ànimes (three springs), and El Puig de les Moleres (two springs). Spas were developing elsewhere and what with its close proximity and easy reaching from Barcelona, it was perfectly situated for the wealthy to visit and those expensive villas and chalets were constructed. The springs themselves were enclosed within splendid spa buildings which provided then and now various hydrothermal therapies and treatments. 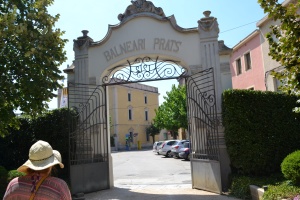 In the 1800s, the water was bottled commercially with three brands coming from the town: San Narciso (since 1870), Vichy Catalan (1891) and Agua Malavella, formed by a merger of two companies after the Spanish Civil War and later acquired by Vichy Catalan in 1985. Of the spa the first of these modern spa was built in 1840 and is called Balneari Prats. Here one enters an archway boldly exclaiming the name and there is a large pool and to the side a small white19th century building which is the spring house. Here the spring flows from a wall mounted spring head and can be sampled

Then in 1898, Vichy Catalan was established. This is a far more august and spectacular building done in a classic Spanish art nuovo style, much of the building is private treatment rooms but there is also a chapel. The spring arises in a wall mounted spring head surrounded by an ankh shaped surround. The water appears more iron rich from this spring. 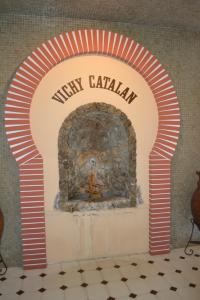 The town is a delightful one full of interest and their spa heritage is well looked after and describe I cannot recommend it enough.