The Old Wife’s Well has been on my to visit list for quite a time. The well is not the easiest to find situated on afforested woodland on the edge of moorland. High above Pickering, but only a few miles, it seems to be 100s of years away. A snapshot of an older tradition. The spring arises in a rather simple square well chamber which is fairly non-descript bar the engraving on the top which is most interesting. The carving reads:

This has been translated as ‘Well of the spirits’; Fonten – meaning spring and Nattie meaning spirit. Is this the Old Wife one wonders? Old Wife is found in a number of sites across Yorkshire: Old Wife’s Hill at Cundall, Old Wife’s Howe at Ravenscar, Old Wife’s Stones at Danby and Old Wife’s Neck which are standing stones on John Cross Rigg. Locally there is Wade’s causeway a long pavemented road which travels romantically across the desolate moorland. Wade was a local giant who is said to have built the causeway, which has been in the past said to be a Roman road, although opinion has changed over time. However, the wife in question is probably not a wife in the modern meaning but from the middle English word Wif which simply means ‘women’ which of course has survived in the term ‘midwife’ Thus the Old Wife simply means Old Women. Now this could refer to an old women who lived by the well, perhaps a local seer. Yet there is another explanation it could well remember the Cailleach, the old woman or hag, a deity of the Celtic population. Dr Anne Ross in her 1960 Pagan Celtic Britain described her as:

“At once mother, warrior, hag, virgin, conveyor of fertility, of strong sexual appetite which led to her seeking mates amongst mankind equally with the gods, giver of prosperity to the land, protectoress of the flocks and herds.”

Certainly the Old Wife’s Well is situated in an ancient landscape being close to a Mesolithic flint mine which was still active in the Bronze age and it is likely that the population used the spring. Of course one most sometimes be wary of wells with inscriptions suggesting ancient gods which may suggest classically aware landowners.

This notwithstanding, the site is powerfully evocative laying in an opening in the afforested woodland surrounded by low laying mist. It certainly is a much visited site by local people who connect with it spiritually and has within the last 30 years become a rag well.

The most common are traditional ribbons some of which are of cotton and should rot. They are attached to the trees and to the wooden enclosure of the well. 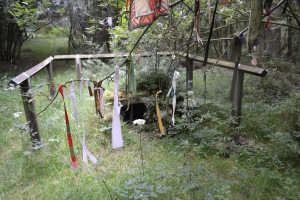 Some of the rags are clearly decaying and covered with algae and moss, suggesting they have been there for sometime.

There are also dream catchers

A cat collar perhaps a votive to wish for the return of a lost cat?

There are some more personal items as well like a glass teddy bear, perhaps linked to a loss of child? 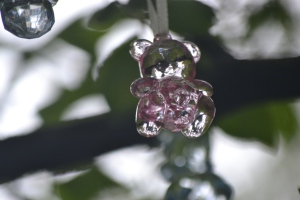 An evocative site hopefully it will not get too over-adorned with rags and objects and retains its mystery!