Burghead and its ancient wells

“An old man suggested that they should dig in a certain sport, where according to immemorial tradition, a well would be found.”

Set out on a peninsula of land in the Moray Firth is the curious town of Burghead: a town which is a world away from much of Mainland Scotland. A town which despite it’s rather drab exterior and uniform nature is one which has many mysteries – it’s unique Clavie Burning, the largest surviving Pictish fort and the Well…all three unique in the Scotland and indeed the world and of course not necessarily unconnected.

I arrived on a windswept January, the day of the burning of the Clavie, an ancient evocative tradition which may have itself have an indirect link to the well. Drawing the key, I approached the well which is enclosed in a high wall strangely juxtaposition within the urban landscape. The first thing which strikes one is the primeval and ominous nature of the site – an opening cut into the hillside, dark and foreboding. Twenty rough and worn rock cut steps lead down to this chamber itself cut within the rocky crag of the peninsula. As one approaches the chamber its size, five metres by five metres and four metres high, its gloomy nature evidence – your voice becoming more and more echoed as you descend into the darkness.

Water filled up to the first two steps making it impossible to see the chamber. R W Feachem (1963) describes the site well noting that:

“The well comprises a rectangular chamber about 16 feet square and 12 feet high, with rounded angles, cut out of rock at the base of a crag … some 20 feet below the present ground level above. The floor is bordered by a ledge surrounding a basin 10 feet square and 4 feet deep, again with rounded corners. When found, during the improvements (commenced in 1808,) the chamber roof was broken and the entrance ill-defined; and the archway now forming the latter was then constructed.”

These ‘improvements’ involved as well recutting the steps and using gunpowder to deepen the pool. These changes probably removed some other features which are no longer visible such as the mosaic pavement around the well and paintings on the wall. This is a considerable shame for these features seen according to Grant (1898) in 1809 would have possibly allowed us to gauge the origin of the chamber. Mosaics and paintings suggest of course a Roman origin and the discovery of them may have lead to the view that the site was Roman, gaining it the name Roman Well. This is a view espoused by Young () who compares it with other similar sites. However, his argument is not particularly persuasive.

Burghead is a unique place. At the very end of its peninsula are the remains of a vitrified Pictish fort, which dates from the 4th to 6th Century. There is no argument that the well has some link to the Pictish settlement, the discovery of a bull carved onto a slab, a common Pictish motif was found in the well. The position of the well on the edge of the ramparts is problematic. It suggests a later origin for why would it not be enclosed safely. However, others argue a more ritual origin. One find, a stone head was found in the well. Readers of the blog will know that there is considerable debate over wells and heads. A number of ancient wells have been associated with skulls or beheading legends, particularly in the Celtic world and indeed an argument has been made of the existence of a head cult into recent times. Another ritual aspect, possibly unique in Britain to the Picts, was the ritual drowning. Historical sources state that Talorgen, son of the King of Atholl was drowned in 739 AD and it is possible that this site was a chamber used such. However, no human remains were found in the excavation to support this view.

If we consider that Grant’s observation to be correct what did they see? A theory was that the well was an early Christian baptistery. Certainly the find of a stone described by Rhind in his 1870 Name Book as:

“a square stone having a cross upon the centre the margin of which was covered with … knotwork cut in bold relief.” 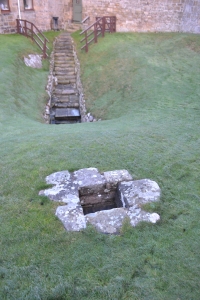 This stone now lost suggests an early Christian cross, the knot work potentially Pictish in origin. A good example being the 9th century Drosten Stone discovered at St Vigeans near Arbroath. The crudeness of the cross suggesting an adoption by Christians which would fit the view of the site as a baptistery. This was probably used in the cult of St Ethan, a local missionary saint of the 7th century. It is possible that these features were from its adoption and are wall paintings of the saint. Little is known of him and I feel his name is too similar to Aethan and so I assume they are the same.  However, this is not the only ancient well in the town. Tucked away on the outskirts, not far from the maltings and once along the old railway which served the town, is St Aethan’s  Well. St Aiden of course was associated with the Iona community and is known to have converted the Picts in the 7th Century, he would have certainly visited Burghead.

Why should a well named after an important evangelical saint here? Its location does not seem to be near any landing nor does it appear to have been associated with any chapel or church. Indeed the position of the church is a possible clue. How old is this well one wonders. It certainly is not as old as the Pictish well and I theorise it was probably established as a focus of faith once the former fell from favour and was possibly lost. The support for this argument is the position of St Aethan’s Chapel which is a mere few yards from the Pictish Well. Surely this is more likely to be the said holy well and not this fairly simple spring. If it had been used ritually by them he would have sought to Christianise this not ignore it. Therefore it also seems probably that the Pictish well was probably lost whether physically (noting it was discovered in 1809) or spiritually, and thus requiring a re-focus but why a spring so far out? Perhaps the geology may explain this. Of course when it was lost is unclear. Evidence would have come from one find Spanish coins but these were lost. The presence of such coins is interesting – it suggests again ritual use, well wishing in its most familiar guise perhaps, but when? One would suggest from the period of the Anglo-Spanish conflict when it is plausible that some secretive links with Spain may have been established. This would also suggest that the association was also Catholic in nature and indicates the well was probably overtly Christianised. This might highlight when the well disappeared and a new St Aethan’s Well appeared created by Catholics in the dying days of a Catholic nature as the Reformation begun to sweep away such practices. However, this is all conjecture.

Interestingly, Morris and Morris (1986) give a rather simple entry for St Aethan’s Well, under the name St Aidan, states that it was close to the railway and difficult of access.  Thus suggesting that they did not find it. That is probably likely as the site was only cleared by the Burghead Trust in February 2014. The group have done a great job providing a large information board which states:

“St. Aethan or St. Aidan as he is also known was a follower of St. Columba in Iona in the 7th century. He brought Christianity to the northern Picts and is the patron saint of Burghead. The water from the well comes from a spring higher up the hill and was thought to have healing powers.”

Chairs have been provided and two metal tankards and dog bowls provided suggesting the water is potable. The water flows through a metal pipe into a shallow stone lined chamber set beneath the sand. The original source is probably that closer to the cliff face which arises in a similar chamber. Both are covered in a metal grille which is a little unsightly, but stops the stray foot getting wet!

Perhaps Christianity was slow to make an impact on the Burghead community and forced to exist on its outskirts..attending the day of its great clavie burning it is easy to see how pagan forces could have resisted the force of Christianity.