The Trent Aegir: a sacred river and its god?

March is a time when the Trent Aegir is at its strongest with the High Spring tides with heights ranging from 8 feet to 13 feet. However in 2013, July and August have the highest predicted Aegir and much of its impact has been reduced by dredging. Brown’s (1874) Notes about Notts describes it as:

“Near the mouth of the Trent at spring-tides the influx of sea water causes that of the river to mount up into a tidal wave six or eight feet high which rolls on its onward course between the confined banks in a remarkable manner. Boatman call it the Eagre, and woe betide the craft that upon such occasion has not a man standing by to pay out a sufficient of cable.”

“At Littleborough if you have good fortune, you may see the Aegir. This is the bore, or wall of water, which rushes up the Trent during the spring tides, followed by a series of waves known as the ‘Whelps’. It is caused by the tide moving up the Humber to the mouth of the Trent where they are met by the big volume of water coming down. A wall rises and flows rapidly up the river, sweeping round the bends with great speed and with a curious rippling sound. Sometimes the wall of water is six feet high, and it brings disaster to any boats which it catches unprepared. George Elliott speaks of the Aegir and the floods in the Mill on the Floss, for the Floss is the Trent.”

“The influence of the spring tide is felt as far as Sutton, but for some miles above Stockwith it is shown as remarkable bore.”

Sadly although West and East Stockwith is still a good place to see it, weirs to the north of Newark and dredging beyond means that locations such as Littleborough are no longer good view points. 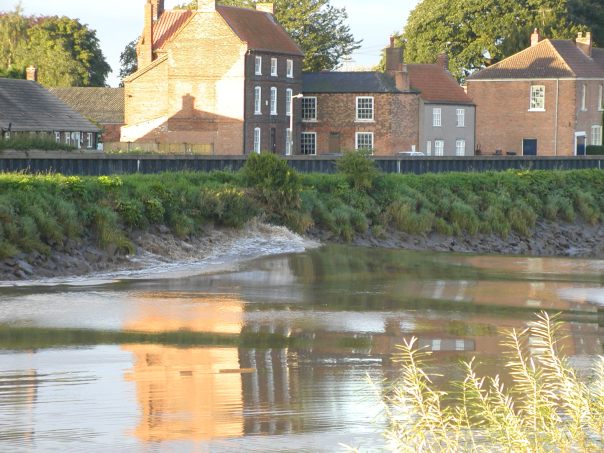 Origin of the name

Marsden’s Lincolnshire stated that it derived from a Norse god of the sea, Kaye in Lincolnshire and South Humberside, suggests that it took its name from ‘Oegir the Terrible’ a Danish god and significantly refers to St. Oggs in the Gainsborough area. It could itself also mean Og suggests it is the same as the sea-giant Hlér, who lives on the isle of href. Aegir is said to be the brother of Logi (fire), Kari (wind) and his wife a sea goddess”Rán”Their children were nine billow maidens who were Unnr (or Uðr, wave), Bára (or Dröfn, wave), Blóðughadda (bloody sea), Bylgja (large wave), Dúfa (the pitching wave), Hefring (the surging wave), Himinglæva (reflecting) Hrönn (the grasping wave) and Kólga (cold wave) doubtless waves which may have gone up the Trent.

A sacrifice to appease the god

The suggestion of an origin from a pre-Christian god, is indicated by the fact that sacrifices were given to the Aegir. This is recorded by Sutton in her Lincolnshire Calendar. Animal sacrifice was according to Sutton (1996) to be celebrated in the Gainsborough area within living memory:

“It was said that the river Trent was a greedy river and would take seven lives a year, so in March when many of the lambs were born a farmer would sacrifice to the river a cade or weak lamb. He believed that by his action a human life would be saved.”

Latter perhaps the giving of a coin was good enough:

“It was the custom to throw a coin into the Aegir to appease the anger of the flow. A number of people believed that the more money the less angry it became.”

From Gainsborough in the 1920s:

“When I was a boy it was the custom to throw a piece of silver into the Trent during the Aegir at the high spring tide and the autumn tide (the equinox). The piece of silver was a toll fee to prevent you from drowning in the Trent. I’ve done it a few time myself as a bot; the silver was a silver three-penny bit, or a tanner (6d). I was once out on the river in a cob-boat diring an Aegir and was lifted very high on the tidal wave. It was very scary at the time but being a kid I didn’t realise just how lucky I was to get away with it. The Aegir always dumped plenty of mud along the river bank and when the mud dried out it was like Fuller’s Earth, a kind of fine powder. It was custom for local mothers to gather this mud for babies’ nappy rash: it was very effective for a sore bottom.”

The Aegir and King Cnut

Another legend is that whilst Gainsborough castle, now covered by Gainsborough Old Hall, King Cnut annoyed by the flattery heaped upon by his courtiers asked to be carried down to the sea in his throne. It is thought that the Aegir was what he was trying to repel. He was of course unsuccessful, noting:

“Let all the world know that the power of monarchs is vain…no one deserves the name of King but He whose Will the Heavens, Earth and Sea obey.”

It was at some point believed to be lucky to cross the river by boat and it conferred healing in some cases, this as may explain why the ferryman across the Trent received a very warm welcome at Clifton, where every Christmas he received a free meal and hospitality on the Parish. The family at North Clifton were famously said to be haunted by a great fish which appeared in the river as a harbinger of doom for one of its members. Notes on it suggest it was a considerable sized surgeon.

Similarly at a bend of the Trent at Owston Ferry was haunted by Jenny Hearn or Hurn or Jenny Yonde. This little creature was like a small man or woman, though it had a face of a seal with long hair. It travelled on the water in a large pie dish.

The Trent is still a mysterious and foreboding river, much of its route quiet and remote…that is until the sound of the tidal wave appears.