One of the most evocative and photographed holy wells, nestling beneath a large rocky cliff, it is a classic pre-mediaeval hermitage. Even in the 21st century has the feeling of remoteness being done a long lane. It is certainly worth noting that I would have change available as there is a charge of £2.50 to park! (I failed to have enough change and parked on the widest part of the lane…okay but I was warned of combine harvesters)

The well here is part of a larger group of monuments – a church, priory ruins and a remarkably large conical roofed dovecot. The priory is said to have dated from the 6th century founded by the saint who was its first abbot. He was the son of King Owain of Rhos and it is said that although this was a humble cell it was developed into a monastery to befit his pedigree. This continued until Viking raids destroyed it and it was re-founded as an Augustinian priory the ruins of which date from this period. Even so there are some remarkable pieces of artefact in the church – two splendid 9th or 10th century Celtic crosses and Romanesque carvings including a fine dragon tympanium on the outside door and a Sheela-na-gig carving. 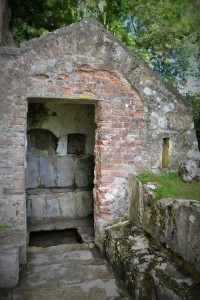 The well consists of a square stone lined chamber over which a crude brick built well house has been constructed over. Inside are stone seats which may predate the present structure. It is possible that the current structure was built when the well was to be developed as a minor spa but no evidence is forthcoming. It is also worth noting that in the 19th century it was called Ffynnon Fair and was marked on local maps as a wishing well. Furthermore the well’s water does not appear to have attracted any specific qualities being said to be a healing well. However, Angharad Llwyd in their 1833 A history of the island of Mona refers to it as St Seriol’s Well. It is more probable that the earlier name was that of the saint, the later probably being applied by the Augustinian community. Just outside of the well, built into the rock face, are the low remains of a supposed round hut. This has been suggested to be the remains of the saint’s hut. Others have suggested it was a changing room for the well? Certainly its position beneath the rock is significant. Ian Thompson in his Early Hermit sites and well chapels relates how the rock face:

“was an appropriate badge of the hermit life and may have even served as a signpost to Christian travelers seeking food and shelter.”

“The Lord is my rock and my fortress…who is a rock save our God?” 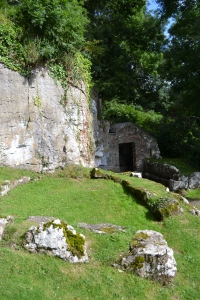 Francis Jones in his Holy Wells of Wales notes that the water was of some repute but states not how, but that it was visited in the dead of night. In the end of the 19th century the Rev Elias Owen tells of a man who asked for the well’s water on his deathbed and upon drinking was restored to life, living for another 40 years. I have taken note of this…best keep a bottle just in case I say. 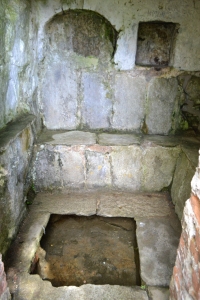 Now despite its appearance in many books and articles, there is still a peacefulness of the site and one could easily sit on a sunny day in the shadow of this rock beside the well and forget the worries of the day!