A Bedfordshire Field Trip: The holy wells of Bromham

I am (slowly) working through researching the Holy and healing wells of the county of Bedfordshire, a county which has never been covered in considerable detail in the topic, although Elliot Steele’s 1922 Bygone water supplies of Bedfordshire is a very good start.

Many years ago in the 1980s when I first got into the subject enlightened and enthused with Sacred Waters I aimed to try and find holy wells locally to where I lived and Bedford was a possible place. I had read brief record of a holy well associated with a medieval bridge in Bromham on the outskirts. However, I could find no more information that this but I did locate the bridge, but the OS map did not reveal a well or spring.

Stopping at one side of the bridge I was amazed to see a small gate, with 18 steps which went down to an arched well head beneath the bridge. This was a rare survival, a Holy Well that arose at the base of a medieval bridge was possibly unique despite a number being recorded in old documents. Sadly, the modernisation of these bridges over time had meant this wells were either filled in or replaced by pumps. However, here it survived.

Why was the well here? The bridge is first mentioned in 1224 when parish records show that 4 shillings was spent on repairs  During the 14th and 15th Centuries a toll was collected from anyone crossing. The bridge also included a Chantry Chapel dedicated to St Mary and St Katherine and this was probably associated with the well. It is recorded that it was constructed for the ‘safety of travellers who were in danger from thieves’. The chapel survived until the Reformation in the sixteenth century which spared the well. However the question is was the well there before the chapel or did it capitalise on the popularity of the spring. . The well itself is little recorded but was frequented by those seeking cures although more recently was used as a water supply for the village. The current bridge, now 26 arches, was built in 1813 and unlike other rebuilds respected the spring which was there. The Bromham walk guide notes that the steps and stone arch were built when the road was widened in 1902. It records that:

“As late as the 1950s the well was easily accessed and often photographed but today it’s overgrown and easy to miss!  Although at first glance there’s not much to see, its a good example of how a small feature in the landscape can tell a bigger story of the history and geography of our landscapes.”

The site on the drive to Bromham mill is long overdue a tidy up and repairing as can be seen by the photos taken in the 1980s and in 2018.

Two mineral springs are recorded in the parish one near Webb Lane and another in Grange Lane the later having a stone-arched head and formerly had steps from the road; its water had a depth of seven feet. Steele (1922) notes that it is now enclosed on private land and I have been unable to locate whether it has survived.

What has survived is the Grove spring. arises in a small wood bearing its name. It is enclosed in a stone arch and fills a channel. Until 2005 the well was ruined and was restored. It is to be said have had curative properties and was cleared in 1872/8 by Lord Hampden for healing fresh wounds. 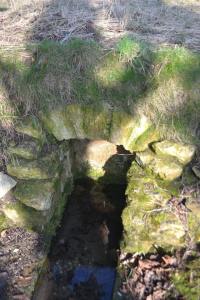 It is said that the water was once much sought after for its purity and was fetched with ‘bucket and yoke’ by the villagers. Tradition has it that the water of Grove Spring in Bromham Park has healing powers for sore eyes and sprains.  It was derelict for a number of years and was restored appearing similar to that shown in Steele Elliott’s photo as can be seen in the 2018. Each year in September in a festival associated with the church candles are lit around the well which is one of the days access through the wood to it is allowed.