A severed head, a mermaid and a bell – the curious waterlore of Marden, Herefordshire Part Two 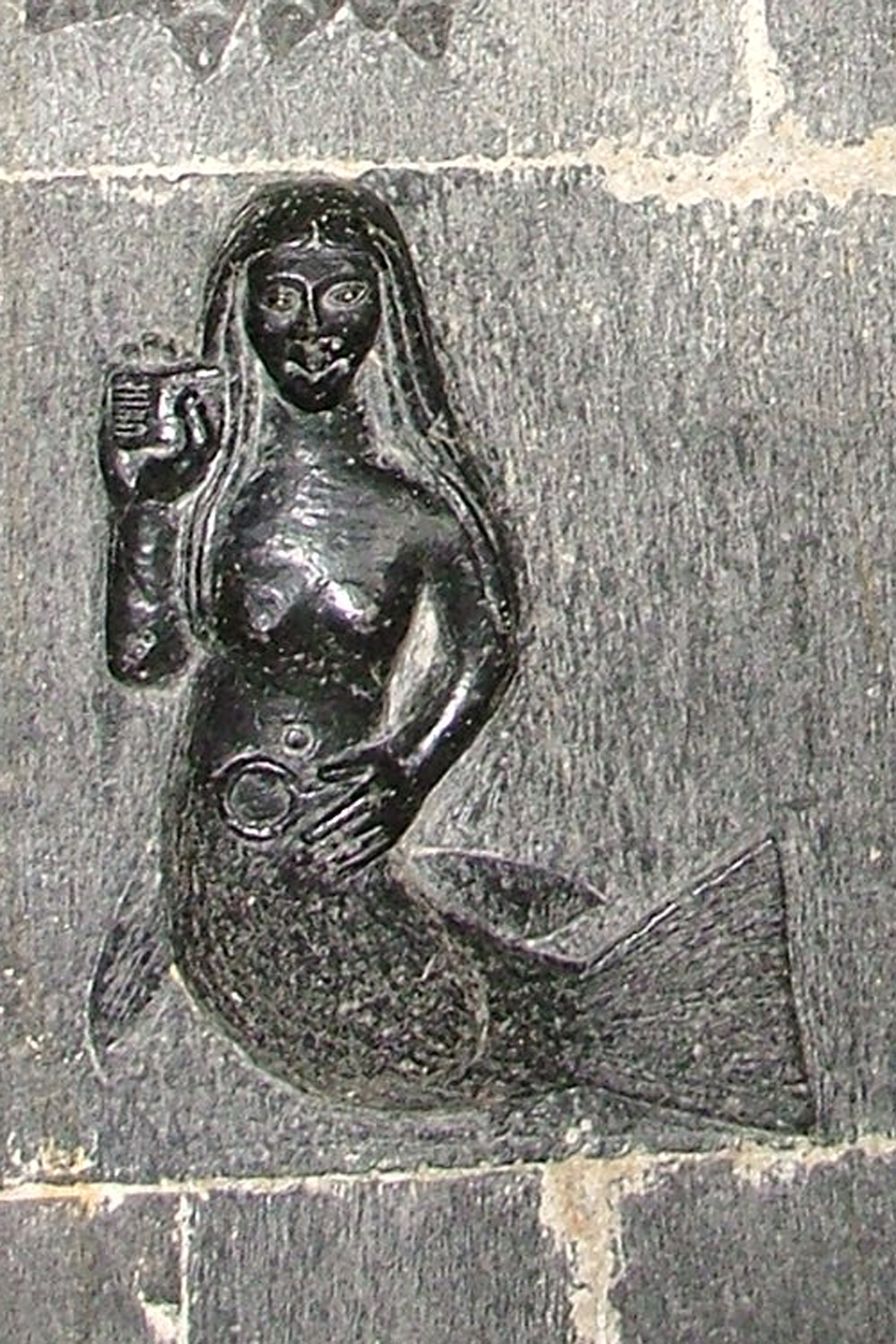 In the last post, we discussed the well dedicated to St, Ethelbert, in this post I shall introduce the other curious piece of local waterlore, the tale of the bell and the mermaid. Ella Mary Leather in her 1912 Folklore of Herefordshire. She relates in a story communicated by a Mr Galliers, of King Pyon and completed from other oral versions:

“In former times Marden church stood close to the river, and by some mischance one of the bells was allowed to fall into it, it was immediately sized by a mermaid who carried it to the bottom and held it there so fast that any number of horses could move it.”

She continues to state how the bell could be recovered:

“The people of the parish were told how to recover it, by wise men, according to some; others say the bell itself gave directions from the bottom of the river. A team of twelve white Free Martins heifers was to be obtained and attached to the bell with yokes of the sacred yew tree and bands of wittern or in some versions, the drivers’ goads were to be of witty or wittern mountain ash.”

Here interestingly is related a common folklore motif. The recovery by a set number of oxen, often unblemished of pattern in some way, the number twelve being a significant folklore number of course.  Also interesting is the mention of yew and wittern – or mountain ash. Mountain Ash was an important plant often used in May time as adornment on houses and was held against witchcraft. Indeed, Aubrey noted

The next stage again is often told at other locations when treasure needs to be uncovered:

“The bell was to be drawn out in perfect silence  it was successfully raised to the edge of the river with the mermaid inside fast asleep. In the excitement a driver, forgetting that silence was all important called out

“In spite of the Devils in hell, now well land Marden’s great bell”

This woke the mermaid, who darted back into the river, taking the bell with her ringing.”

“If it has not been for your wittern bands or witty goads and your yew tree lin, I’d have you twelve free martins in.”

This of course appears to indicate the power of the sacred foliage used which prevented the full effort of the mermaid.

“So Marden folks have never had their bell back from the bottom of the river to this day, and sometimes it may still be heard ringing, echoing the bells of the church. It does in a deep clear pool.”

Now this is as I have said a common folk motif. A similar story is recorded at the Callow Pit, Southwold in Norfolk about not speaking. Here an iron chest filled with gold said to lay at the bottom of the pit.   Many years ago, two adventurous men determined to retrieve it. Having placed a platform of ladders across the pit they were success to insert a staff into the ring in the lid of the chest, and bore it up from the water. They then placed the staff on their shoulders and prepared to bar their trophy off. As they did so one of them exclaimed: ‘We’ve got it safe, and the devil himself can’t get it from us.’ Instantly a cloud of sulphurous steam arose and a black hand from the pool and latched onto the chest. A terrible struggle ensued and after much exhaustion, their treasure sank back down into the murky depths. All the men retained was the ring.

A closer version is told at Newington Kent, associated with the Libbet Well, the legend blames the church wardens, who decided to sell thechurch’s great bell to pay for the repair of the others.  So as not to be seen they did it at night, but the Devil appeared and threw it in the well. At first  they  had great success at raising the bell to  the surface, but the rope broke, they tried again and failed. A local witch arrived, and told them that the only way it could be raised was by drawing it up by four pure white oxen. This was done, and it was almost raised to the surface until, a local urchin, who was passing, shouted out at the top of his voice, ‘Look at the black spot behind that bull’s ear’. The rope instantly broke, and the bell was lost forever!

Rediscovery of the bell! Now these other legends are just that legends and usually such a story ends, but this one has a postscript. Leather (1912) further records:

“In 1848 in cleaning out a pond in Marden, an ancient bronze bell was discovered . It lay at a depth of eighteen feet, beneath the accumulated mud  and rubbish of centuries. The bel, which is now in the Hereford museum is rectangular in shape the plates are riveted together on each side. The clapper is lost , but there remains the loop inside from which it was suspended.”

Now of course what is unknown here is what came first, the bell’s discovery or the legend. The bell’s rediscovery would be vindication for such a legend but as Leather is the first to record it, it could be that the legend was constructed around the bell. However, I feel less sceptical about it considering how complex the legend is.

Let us first consider the bell. Leather herself introduces the idea that these were bells that the sexton or clerk took to the houses of the deceased on the day of the funeral. However, they originated as  portable bells often associated with saints, indeed one in Glascwm a bell called Bangu was said to have belonged to St David,.  Ireland, Scotland and Wales. In his work Wirt Sykes 1880 British Goblins it is noted that:

“Clergy were more afraid of swearing falsely by them than the gospels, because of some hidden and miraculous power with which they were gifted, and by the vengeance of the Saint to who, they were particular pleasing; their despisers and transgressors were severely punished…. Have in all probability hidden long ago by reformers on account of the superstitious beliefs attached to them.”

Now it seems likely that the bell was perhaps used to warn off the mermaid (whatever that might be) as a way of Christianizing the site and removing any pagan imaginary. Does the story recall the battle between the pre-Christian world and the Christian world? The message being in this remote region that paganism still has its grip despite the church!

What was the mermaid?

It might seem unusual to hear about a freshwater Mermaid, certainly one so far from the sea. However, she is not alone. There are mermaids in the Peak District, Lancashire and elsewhere – indeed there are more freshwater ones than sea water in England. Why? It is probable that these are folk memories of water deities which are converted to otherworldly creatures. In the case of Marden’s slightly sympathetically, in other mermaid stories she steals people and drowns them.

Was the mermaid the deity which was originally associated with St Ethelbert’s Well? It is possible although there is a long gap between a likely Celtic deity and Saxon Christian conversion, although it is possible that a Saxon deity like Nerthus could be the origin. That is of course if St Ethelbert is the original saintly dedication. His legend is so generic as stated in the earlier post, he could have easily replaced or been mistaken for a local pre-Saxon saint. Certainly Leather suggests the bell has an association with the saint:

“The Marden bell was perhaps associated with St Ethelbert ; the pond in which it was found is near the church which stands on the spot on which the body was first buried before its removal to Hereford. “

Such a bell is not a Saxon type but it is not without reason that the style continued into the Saxon period, especially in boarder country. Alternatively, the bell may be an indication of the existence of the pre-Saxon saint I muted. Certainly the discovery of the bell in a pond may indicate the true location of the village’s holy well and not the dry pit that survives in the church. Whatever the truth it is an interesting and little known story and one would welcome observations by readers.