St Trillo’s Well has been on my personal must visits for some time. It is not only a unique site being a chapel enclosing a holy well – a rare survival – its location tucked under a seaside road, a juxtaposition between the seaside houses and the promenade and the sea makes it one of the most unusually situated. It is everyone’s classic view of an ancient chapel, privately arranged and simply adorned and whilst it may not be as old as first assumed it does have its own unique charm.

I was particularly concerned that it may be open. Being a chapel I am always wary that like churches – urban areas and access do not often work. Yet parking above it, now almost hidden by shrubs and the hill itself, the path led to the railed enclosure which was open and walking around I pushed the old wooden door, it yielded and I was in.  As soon as one enters, one is overcome with a feeling of peace. Whatever frivolities gone on outside feel an eon away. As a chapel it is very unusual, being claimed with its room for six chairs, to be the smallest church in Britain. This is no folly but a functional place of worship for the congregation which meet for communion on Friday mornings and those more intermittent visitors who leave votives and prayers. For perhaps uniquely again for a British well, the saint’s intercessions are still asked for via its well.

Many years ago historians thought that the chapel dated from the early medieval, even from the 6th century times of the saint. However, whilst it is very likely that the present structure is built upon this original hermitage it is much more recent. Generally it is thought to date from the 1500s. Francis Jones in his 1954 Holy Wells of Wales notes:

“In the Denbighshire parish of Iscoed, a certain Angharad verch [daughter of] David, examined in 1590 before Roger Puleston of Llay, the local Justice of the Peace …resolutely refused to conform “by reason of her conscience.” In answer to further questions concerning her marriage, she declared that the ceremony had taken place last harvest time at a place called Llandrillo Chapel near the sea side in Creuddyn whilst she was on a pilgrimage to St. Drillo’s [sic] well.”

Such a visit suggests a pre-Reformation importance to the site especially as the date, in Harvest, suggests a regular pilgrimage as this was a popular time to go. Thomas Pennant visited the site in the late 1700s and described it as:

“… saw close to the shore the singular little building called St Trillo’s Church. It is oblong, has a window on each side and at the end; a small door; and a vaulted roof paved with round stones instead of being slated. Within is a well. The whole building is surrounded with a stone wall.”

Clearly what is seen present despite in its ancient appearance is Victorian in nature for in 1892, a letter in Archaeologia Cambrensis by folklorist and cleric Elias Owen (author of Welsh Folk-Lore) described it as :

“I was sorry to find that the vaulted roof had fallen in, that the well inside the chapel was covered over with the debris from the roof, and that the whole structure and its surroundings presented a ruinated and uncared for aspect.”

This concern was headed and in around 1898 two buttresses were erected to support the seaward side, a cross was inserted into the gable and more importantly a new roof. A stone altar was inserted over the well and stain glasses of Saints Trillo and Elian installed. An account by the Royal Commissioners who visited in 1912 happily describe a better condition, being described as:

“A small building, internally eleven feet nine inches by six feet three inches, standing on the sea shore within reach of the highest spring tides, and sheltering a small spring of clear water which traditionally represents the well of the patron saint of the parish. The building is roughly vaulted, and, according to earlier accounts, the vaulting was effected in the primitive manner of the earliest Christian oratories … It is, however, doubtful if the chapel is not far more modern than it is assumed to be.”

It has remained well looked after ever since, being adopted by the church of Wales who have a rather intimate Eucharist ever Friday at 8 am during the summer. 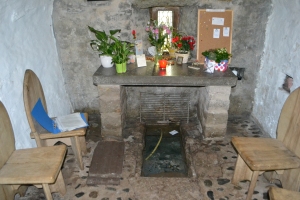 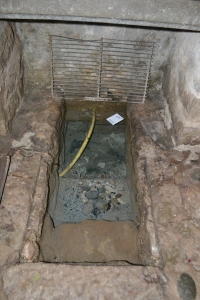 The first thing to notice is that the well is central to the chapel’s function being positioned in the centre beneath the altar. It is covered by a metal grill and two wooden slats. Upon removal two steps appear, suggesting perhaps that the water was easier lower or else individuals entered it for baptism. Indeed, baptism appears to be the only recorded function for its waters. The water is clear and arises at the foot of the hill being channelled into the well chamber by pipes. It is clear that it was the spring which caused the saint to establish a hermitage here.

“St. Trillo’s Chapel: inside is a well, formerly much esteemed for the sanative virtues of its waters; it was supposed to have been the constant residence of the saint.”

But despite this and such postulations by Colt Hoare, who visited the well one July in 1801 noted it was:

“once probably held in high veneration for its miraculous qualities.”

But stated nothing more. Interesting there are no ‘modern’ traditions of the well and it would appear it has become a largely supplementary feature to the chapel’s powers via the intercession of St. Trillo.

Who was St. Trillo?

St Trillo who is shown with fellow local saint St Elian, in two small stained glass windows in the chapel, was the brother of two other saints, Tegai and Llechid and was a monk of Bardsey Island before settling here. He is also saint to have been involved with the Diocese of Bangor Diocese. However, like many 7th century saints little is really known.

Located as it does seems an unusual place for a holy well perhaps but as Francis Thompson (2008) in his Early Hermit sites and Well Chapels states its location is not that unusual. Indeed, along with cliff races, islands and valleys, it was another ideal location for a hermit to reside. Furthermore, it was a very fortunate place to be, the sea would provide a harvest and even today the rock pools are full of winkles, mussels and edible seaweed. The survival of a medieval fish trap a few yards from the chapel is also significant and may have been the occupants attempt to provide a more substantial harvest by trapping fish. Not only would such a location provide a bumper food supply, fishermen may have provided money in thanksgiving or offerings for a profitable and safe fishing.

This giving of thanks or asking for the saint to intercede with God is still very much an important role for the chapel. On the altar are a range of curious items, votive gifts of thanks and on a board petitions are regularly attached. Tristan Grey Hulse in his 1995 A Modern Votive deposit at a North Welsh Holy Well for Folklore, Volume 106 recorded the range of requests. The author notes:

“Thus the sudden and spontaneous development of a new religious cult practice at the chapel is a fact of some importance, likely to be of interest to students in a variety of disciplines. I have visited Capel Trillo many times over the past fifteen years, but beyond noticing the odd coin thrown into the holy well, I had never seen the chapel otherwise than described above. But paying a first visit in 1994, on 21 April, I encountered a significant change. There were more flowers than usual, in pots on the window-ledges as well as on the altar. There was a crude but exuberant and colourful painting of St Trillo standing by his well propped against the altar; and the altar-table itself had scraps of paper scattered across it. Each of these contained a handwritten prayer or request for prayer. There were seventeen in all. Intrigued by this unexpected development, I copied the texts.”

“The present custom apparently began in the summer of 1992. Arriving as usual one Friday morning to celebrate the Eucharist, the vicar of Llandrillo, Canon E. Glyn Price, found a single piece of paper impaled on a nail sticking out from the wall of the chapel, containing a hand-written prayer. Touched by its contents, he left it there; and the following Friday found that it had been joined by several others. The vicar placed them all on the altar. Since then, the practice has continued uninterruptedly, without any encouragement (or-perhaps significantly discouragement) on the part of the parish clergy.

Now, at any one time there is an average of perhaps thirty votive notes on the altar. Each ex-voto is left for three or four weeks before being removed and reverently destroyed by fire. Originally Canon Price read out each invocation in the course of the weekly Eucharist at the chapel, but eventually the growing numbers rendered this impracticable, and they are now commemorated collectively. The chapel cult has also expanded somewhat, in that offerings of flowers are now left anonymously; and the “folk-art” depiction of St Trillo arrived in the same manner.”

In Hulse’s article he notes that the principal petition was regarding health (19). Interestingly to those prayers which are addressed, these according to Hulse’s survey was overwhelmingly to God (17) compared to the saint (8), although a number were ambiguous in their dedications.

The ailments ranged from Insomnia to Cancer, through eye problems, stress, a physical disability or else concerned the well-being of the family whether through reconciliation of its members, improvement of the quality of life or overcoming bereavement, the commonest perhaps reflecting more the age of the votive despositer. One even requested help to learn Welsh! The majority were women.

These votives still cover the altar as can be seen and between the two visits I made they had clearly changed. Now official notelets are produced and pinned to the board beside the altar, these two changed between the visits. Indeed, sitting for just over an hour a steady stream of ‘pilgrims’ can be seen many just curious, others did appear to leave something..so it pleasing to see this most romantic of well chapels still functioning in 21st century Britain.

If you visit only one holy well after reading this blog – make it this one. Easy found and reached (and signed) either by walking along the promenade or driving Marine Parade to Trillo Avenue, Why? For its peace, for its uniqueness, for its feel of the ancient, a connection to the time of hermit saints – or for the fact you can visit this, have an ice cream, do rock pooling and see the oldest puppet show in Britain…what’s not to like!?