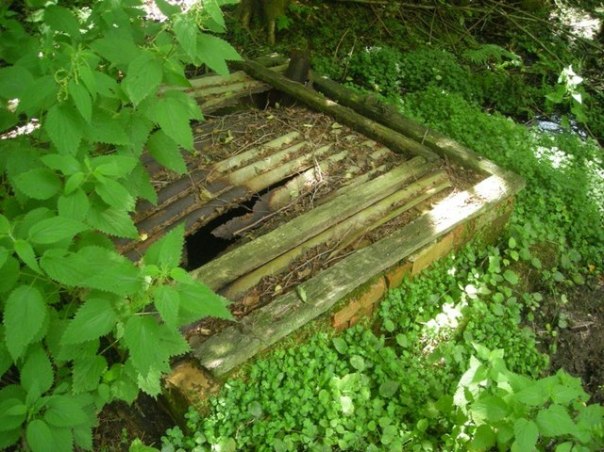 Deep in the woods is one of Surrey’s forgotten springs, a site possibly a holy well, probably a pagan spring, so nearly a spa. In Fields, Paths and Green Lanes being county walks, chiefly in Surrey and Sussex , Louise Jennings in 1878 notes:

“Mr. Urban’s correspondent is among the very few writers who have made any mention of ” Mag’s Well,” a spot which the compilers of all the local guide-books have passed by without a word. It is the charmed spring of the district, and lies not far from the village of Coldharbour.”

However, Mag’s Well was noted at length by William Thorne’s The Garden of Surrey:

“MAG’S WELL This is a mineral spring rising on a farm called Meriden about three miles from Dorking and forming the source of the stream called Pipbrook which runs past Dorking town Instances of extraordinary cures in cutaneous and scrofulous diseases are related of it and it is said to have derived the name of Mag’s Well from a poor woman of the name of Margery who first experienced its healing effects in the cure of a scorbutic disorder.”

“The reason it was called Mag well was because a poor wench, whose name was Meg, that was troubled with the itch, and lived thereabout, first cured herself with washing”

Cures for all – even the animals

John Timbs in A picturesque promenade round Dorking, in which he quotes the Gazette of Health thus speaks of the water

The account continues noting its possible use for animals as well:

“Taken internally the water was long believed to be at once strongly cathartic and emetic That opinion has probably been less prevalent since the publication of Manning’s Surrey in which these alleged properties are strongly controverted although in that work it is said to be detergent.”

Timbs decides to examine at first hand the site:

“ however that many of the country people continue to put great faith in the virtue of Mag’s Wells 1 resolved personally to examine what is esteemed one of the curiosities of Surrey The farm on which the well is situated belongs to the College Guildford and is in the tenantry of George Dewdney esq banker remote from any public road and embosomed in woods A pedestrian excursion to the vale in which the spring rises appeared the only mode by which I could obtain my object the obscurity in which the well is hidden rendering it inaccessible to a carriage and almost to a horse for nearly the last mile of approach.”

It was perhaps its remoteness that preventing any commercial venture, that notwithstanding he notes that:

“The bath or well is comprehended within a building the sides and ends of which are joined into right angles but there is no roof Immediately opposite the entrance of the building is the door way to the bath into which there is a descent of five steps the bath is in length about seven feet and in width and in depth between four and five feet The water enters at an aperture on the right and the surplus when the bath is full discharges itself over a lip on the left the whole can be readily run off through a vent at the bottom and at the left hand corner by drawing a plug The whole structure has apparently been for sometime much neglected The entrance and the exit of the water being imperfect the bath was nearly empty the depth not being more than three or four inches.”

Of the water he gives the lengthy discourse:

Mag’s well still survives although it is difficult to gauge which is the source as the neglect has continued since Timb’s day. There is a well structure covered by a decaying wooden lid and nearby a larger pool, perhaps the aforementioned bath.

Some historians have attempted to produce evidence for a pre-Christian origin of the site, some suggesting the name Mag may refer to a pre-Christian deity. More convincing was its location in an area called Cold Harbour. For many years this was the accepted view given by Basil Barham of the East Herts Archæological Society, Author of “Changing Place Names,” in the Times:

“The origin of the name Cold Harbour has been discussed several times. It is a Saxon place name, and means exactly what it says, viz., a “cold,” as distinct from an inhabited refuge. The Cold Harbours are all in the vicinity of one or other of the great Neolithic or Roman roads, and were originally the remains of partially destroyed Roman or Romano-British dwellings, or settlements. Travellers used them as being more or less secure places in which to spend a night. As the places became known, traders gathered there to distribute goods and do business, and eventually the places once more became villages, but retained the old generic name.”
However, despite the convenience of this view point it is now generally discredited. Of course as the majority of England’s road are based on Roman ones it is statistically likely they would be found with them! Indeed half of the populated places in England are 3.5 km or less from a Roman road This and research that showed the name Coldharbour was popular in the 17th century seems to suggest otherwise!”

Notwithstanding there is sometime otherworldly about this well and whatever its origin it survives, slightly forgotten, in its woodland setting.