From the car park one has an evocative if a little muddle journey to the ruins of Hollinshead Hall and its so called Holy Well, although it is well worth it. My knowledge of this curious well being drawn by an excellent article by Cramshaw in the now defunct Source. The house has virtually been raised to the ground all bar a few foot high walls criss-cross the field they lie and by far the most substantial remains is the holy well. As such it is the largest holy well in the county yet for certain is known regarding it. 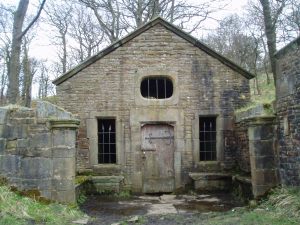 It can be described as being built in the same sandstone rubble as the hall with a stone slate roof. The building a single cell is built into a slope from which the spring arises and is encapsulated by it. Either side a high walls creating a sort of forecourt with side benches with inward-facing chamfered piers with ball finials at the ends. The well house itself is quite an attractive building and is certainly not thrown up, having a symmetrical facade with chamfered unglazed widows which are fitted with spear-headed iron bars and clearly the building has never been glazed. The gable end has a large oval opening with a matching one at the rear. In the centre is a heavy board door with a chamfered doorway. This doorway unfortunately is locked baring any entrance to the well house.

Peering in through the windows one can see how strong the vaulted roof is, adorned by a pendent ball in its centre. The spring’s water flows from a crudely carved lion’s head, either side of a reredo of Ionic colonnettes, with a sunken stone tank beneath and each side a rectangular recess which enclose rectangular pools. There is a diamond-paved floor with a central gutter draining from this well or trough at centre of rear wall:

Abram’s “Blackburn (1877) is perhaps the first to state that the water was curative. However, anonymous quote in Nightingales History of Tockholes  describes the well as:

“Here no less than five different springs of water, after uniting together and passing through a very old carved stone representing a lion’s head, flow into a well.  To this Well pilgrimages were formerly made and the water which is of a peculiar quality, is remarkable as an efficacious remedy for ophthalmic complaints.”

Post-Reformation holy well or is it a diary or grotto

Local tradition accounts that there was a site here from Medieval times and indeed, that the name Hollinshead was derived from a version of holy well although O.E hol, for hollow is more likely although there is a Halliwell Fold Farm nearby being derived from O.E halig for healing. The pool  with steps down above the well house may be the original well of course. The discovery of a hoard of medieval coins in 1970s would support the date and perhaps they were an offering. Another tradition is that the site was a resting place for pilgrims to Whalley Abbey and that the trough was used as  baptistery, however, this would be more likely to be the spring above the well house.. It is probably a springhouse, a structure built over a natural source of water for the storage of dairy products and other foods that needed to be kept fresh.

Reculsancy, that is practising Catholicism in secret, was very prevalent in Lancashire and the well house does the bear the coat of arms of the Radcliffes . It would suggest why the structure is so ornate and suggest a 1600s date although many authorities suggest an 18th century origin.  The site would be a secret baptistery and its design as a dairy ,would also help as well as being still function, certainly the presence of benches suggest this functionality. It appears to be too close to the house to be a garden folly such as a grotto! The suggestion of stained glass in the windows suggests something more significant discovered during the present stone roof’s construction. Indeed, the choice of the lion’s head is possibly that of the ‘Lion of Judah’, meaning Jesus providing rich and valuable water, although this is a common motif on many drinking fountains of course! Interesting, Cramshaw tells us that the site was in the 1980s the site of a well dressing, although what type is unclear and no other author has mentioned it as far as I am aware. Perhaps we shall never know the real origin of this delightful building.