St. Christopher’s Well (SK 861 320) is an interesting well! St. Christopher is an unusual dedication for holy wells and one supposedly exists in a small backwater of the Lincolnshire and Leicestershire borders. I say supposed because it’s true origin is unclear.

Much of what we know of the well is from various contributes to Lincolnshire notes and queries in the 1920s. Key to these was Welby (1926-7), who was the owner of the estate. He states that a two storey tea-house was erected over the site, the under one having an inner arch over the spring and the upper having two tall sash windows, glazed with large panes with a sloping roof on all four sides meeting a ridge. Welby (1926-7) notes that his father remembered using the structure and states no older building such as a chapel could be seen inside. This tea house did not last long, and a small summer house was constructed in the 1840s but no sign of it can be seen now. Welby (1926-7) describes this as being tall and wooden, open at the front and having small side unglazed windows. This also did not last long as was removed in 1850 when he claims the present grotto was constructed. However, this clear has older fabric. This is without doubt the grandest structure over a well, especially in Lincolnshire and it’s sad to note it no longer remains.

Although, the summer house has gone, the well is still marked on the map in gothic italics suggesting something substantial remains. Exploring around the edge of the pool, soon the site can be seen. This is no simple spring, boggy hole, as sadly in the case of many other Lincolnshire, this is still something more. Despite being cloaked in undergrowth, an arched grotto or cave can be seen. It is four metres by two metres high which is lined with cement rubble stone. At the back of the structure is a circular 50cm diameter well with an overflow channel set out by large flag stones set below the ground surface by 5cm, its water a sluggish stream, running into the lake. This channel is set out by large flag stones either side of the channel. Above the basin is a stone tablet, which is heavily worn by water action it would appear that it is difficult to read cemented around this are small ammonites and possibly a stone head although it may be a large stone resembling a head. Set into the walls of this structure is a large ammonite.  The stone tablet according to Headley and Meulenkamp’s (1999) book on Follies has a poem Huius Nympha Loci:

“Approach you then with cautious steps, To where the streamlet creeps, Or Ah! Too rudely you may wake, some guardian nymph that sleeps”

As started the name is an odd one and the first mention of a spring in the area is from for in the 1700s the site was simply called spring wells according to a book of furlongs in 1784. The first mention of the site as both a medicinal and holy well appears to be Howett (1801) in A selection of views in the county of Lincoln which is accompanied with a sketch so apparently it was already been ‘improved’ by the landowner as a folly structure. Marrat (1816) History of Lincolnshire rather than White (1852) as Welby (1926-7) notes, perhaps suggesting either its discovery then although there is no evidence of exploitation here, a case more common with older springs in this period.  None of these sources name it St Christopher’s Well  but the name may not be that old, although Antiquarius Rusticus names it Sancaster and unusual name again and perhaps a form of consonantal drift -Saint Christopher = San C…ster..the reader can be the judge! However, inspection of the actual tablet would suggest otherwise. Of what can be read:“Here fairies dance and sport…” is the clearest! 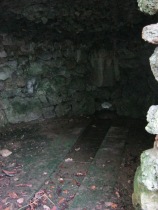 It is probable that the name was affixed when the spring was transformed into an estate folly at the beginning of the 1800s, although why St. Christopher was used is unclear it is not a common dedication associated with springs.  Today there is certainly no sign of the summer house.

Away with the fairies

Antiquarius Rusticus (1926–7a) informed by the Rev C.C. Buss notes that:

“St Christopher’s Well, the water of which is said to resemble that of Tunbridge… was once in great request for its curative virtues… An ancient dame who has lived all her married life in Denton went… a few miles away and while there she was taken ill…. She told me how greatly she had longed for a drink of the water from St. Christopher’s Well as she was sure it would have hastened her recovery. The spring issues from a smaller vault or cave.”

Sadly the associated manor was demolished many years ago but the site is still marks and remains being part of land belonging to Sir Bruno Welby. Despite its dubious origins, traditions have associated with it and it is said that the spring is very pure and is similar to that of Malvern waters. In the basin appear to be coins suggesting that ‘well wishing’ is still undertaken here, although by the verdi-gris on the coins some appear very old! Water sluggishly flows from this basin into a stone lined channel into the lake below. The site is one of the best in the county and is surprisingly little known. copyright Pixyledpublications and thanks to Holywell@megalithic portal for the photos