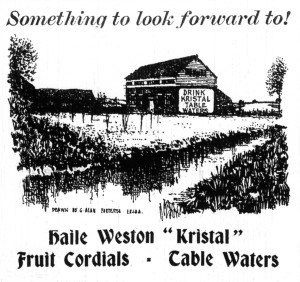 In Huntingdonshire, twin springs, simple called the Hail Weston Springs were the most celebrated in the county and were highly esteemed and much visited but now lost and largely forgotten. Charles Hope in his 1893 Legendary lore of holy wells notes basing his work of C. G. Cameron, H.M. Geological Survey:

“HAIL WESTON : HOLY WELLS. At Hail Weston, on the borders of the counties of Bedfordshire and Huntingdonshire, about two miles north-west of St. Neots, there are some mineral springs, formerly looked on as holy wells. They are situated on the alluvium of a small stream, but may have their origin in the underlying Oxford clay. Michael Drayton describes them as “the Holy Wells of Hail Weston.”

Indeed it does appear to have  Michael Drayton who suggested these were holy wells in his Polyobion published in 1613 as follows speaking of the Ouse, as they were discovered less than 20 years before that publication in 1597:

“The muse, Ouze from Fontaine brings, Along by Buckingham and sings, The earth that turneth wood to stone, And t’holy Wells of Hailweston……Scarce is she entered yet upon this second sheere,Of which she soveraigne is, but that two fountains cleere, At Hailweston neere hand, th’ one salt, the other sweet, At her first entrance thus her greatnesse gently greet, One we were two fair Nymphs who fortunately proved. The pleasures of the woods, and faithfully beloved. Of two such sylvan gods, by hap they found vs here, For then their sylvan kind most highly honoured were, When the whole country’s face was forresty, and we Liv’d loosely in the wilds which now thus peopled be. And quoth the saltish spring, as one day Muse and I Set to recount our loves, from his tender eye, The branish teares dropt downe on mine unrepeared breast, That brackish I became. He finding me deprived Of former freshness quite, the cause from hmm deprived, On bestowed this gift, my sweetness to requite, That I should ever cure the dimnesse of the sight!‘and’ quoth the fresher spring, ‘the wood-god me that woo’d, As one day by brm surprised with love he stood, One me bestowed the gift, that ever after I, Should cure the painful itch, and loathsome leprosie!”

His naming them as holy wells appears to be unquestioned. Fuller in his 1665 Worthies notes that:

“Now in the aforementioned village there be two fountainlets, that are not far asunder, (1) one sweet, conceived good to help the dimnesse of the eyes; (2) the other in a great measure salt, esteemed sovereign against the scab and leprosie. What Saith St James? Doth a fountain send forth at the same place, sweet water and bitter?’ meaning in an ordinary way, without miracle. Now although these different waters flow from different fountains, yet seeing they are so near together it may be justly advanced to ber the reputation of a wonder.”

It was still esteemed in 1770 when it was described as:

“There is a mineral spring at a village called Hail Weston, near St Neots, which is esteemed extremely useful in curing many disorders incident to the eyes and likewise for eruptions of the skin.”

“place of baths or medicinal welles is at a hamlet called Newston, a little from Sant Neots…which is ten or twelve miles from Cambridge, where two springs are known to be, of which the one is verrie sweet and fresh, the other brackish and salt; this is good for scabs and leaperie the other for dimness of sight sweet and cured painful itch and leprosy was salty and cured dimnesse of sight. … Verrie many also doo make their reparie unto them for sundrie diseases, some returning whole, and some nothing at all amended, because their cure is without the reach and working of those waters. Never went people so fast from church, …as they go to these wels.”

The site of these spring was north-west of Hail Bridge, the site is marked as mineral springs on the first edition OS map. The 1952 OS marks as Sodium and soda and saline (covered) and a separate spring. Kelly (1898) includes a lengthy piece on the springs:

“Springs.-Near the village, and on the right bank of, but at some distance from the brook, are three mineral springs or wells of considerable value, and once in high repute: they rise within a limited area situated on high ground sloping gently to the brook, and through strata of the secondary period, but though near each other, differ materially in their constituent elements, two being distinctly mineral, and therefore medicinal in character, while the third supplies fresh water of remarkable purity. It appears probable that the existence of these wells was known at a very early period, land in the immediate vicinity of the springs having furnished large numbers of Roman remains, some of considerable antiquarian interest; and it is an ascertained fact that the springs in question were extensively used for medicinal purposes, as long ago as 1597, during the reign of Queen Elizabeth. Raphael Hollinshed, the well-known chronicler of that period, whose histories were published in 1577, refers at some length to the wells of Hail Weston, and to the great repute of the waters yielded by them, as remedies for diseases of the skin, dimness of sight and other affections. A short poem by Michael Drayton, “The Holy Wells of Harlweston’’ describes these springs; and their characters and reputed medicinal properties are also mentioned by Fuller the historian, and by Camden and others. Later on the wells fell into disuse, in consequence of the land surrounding them having been much trespassed upon, and therefore inclosed by the owners; but in 1815, samples of the water yielded by the two mineral springs were submitted to analysis by Dr. C. R. Aikin, whose report (dated June 24th, 1815) was produced when the Hall Weston springs were sold April 2nd, 1844. In December, 1885, the springs were visited, and samples taken from each, by Arthur H. Hassall esq. M.D. and E. Godwin Clayton esq. F.I.C., F.C.S. and these samples were afterwards submitted to full chemical analysis, with the following results:-the water taken from the fresh water spring was found to be of excellent quality, and therefore well adapted for ordinary consumption; the water from the first of the two mineral springs contained as its chief constituents chloride of sodium and sulphate of soda & belongs to the class of saline aperient mineral waters, but without their unpalatable qualities; it is free from every kind of organic contamination, and constitutes an agreeable table water. The water of the second mineral spring has a local reputation for its beneficial effect in cases of skin disease, and has long been known by the name of “Scorbutic” or “Sore” water. These springs are used by the Hail Weston Springs Company, for the manufacture of soda and potash water and other aerated beverages. The results of the analyses of 1885 are given below, the figures representing in each case parts by weight in 100,000 parts of water:

Google map view of the location of the lost mineral springs