Leicester unsurprisingly being an ancient settlement boasts a number of wells all of which have been lost. The most noted is the spring-name called Tostings Well, which some authorities believe derives St Augustine’s Well.   An author with the name ‘Leicestriensis’ says in 1852 (quoted in Potter (1985)) that it was

“now covered and enclosed; but within the memory of persons still living it was in the state… described by Nichols… “Good for sore eyes”… even since the enclosure of the well, many applications for water from the pump erected in the adjoining ground have, I know, been made… On making some enquiries a few years ago of “the oldest inhabitant”, he… exclaimed “Oh! You mean Tostings’s Well!”’.

Nichols (1795–1815) places near a footbridge called Bow-Bridge ran from the Friary near the West Bridge, over a back water of the Soar, to the garden called Bow Church Yard. He describes it as:

“for the use of the friars to a constant spring of limpid water, on the paved road side, a few paces distant, called St Austin’s Well”

“Still overflowing with contribution to the back water… the well is three quarters of a yard broad, and the same in length within its inclosure, the depth of its water from the lip or back-edging on the earth, where it commonly overflows, is half a yard. It is covered with a mill-stone, and enclosed with stone and brick on three sides; that towards Bow-bridge and the town is open.”

Sadly it has now been entirely destroyed, occasioned by widening the road.

Slightly more difficult were the springs associated with Leicester Abbey were the Merrie Wells which Potter (1985) and Rattue (1993) suggest derivation of St. Mary’s Well, although no record confirms this. The springs too have been lost. .

More likely is unusually named St Sepulchre’s Well, recorded as Pulcre well in 1476 and was believed to be associated with a chantry of Corpus Christi recorded in 1458 in the payment records of de Joh. Paulmer pro crofto juxta fontem S. Sepulchri. It appears that by 1574 it was called according to Cox (1998-2004) ‘the spring at St James Chapell’ 1573, ‘the hermitage well’ 1638, and ‘the Chappell Well’ 1689,

‘Leicestriensis’ (1852) calls it St James’s Well, as the Chapel of St James survived that dedicated to St. Sepulchre. Billson (1895) notes it as:

“a holy well close to the old pond at the corner of Infirmary Square. This well had a never-failing supply of fresh water, until the deep drainage of the town diverted it from its original outlet.”

Leicester had two attempts at developing a spa, Spa place a terrace of four late Georgian houses remembers the first. Here in 1787 a mineral spring was discovered when a  well was being sunk for cattle, and Spa Place. Watts (1820) comments how:

“furnished by the proprietor with neat marble baths and easy convenient appendage for bathing, has not been found to be sufficiently impregnated with mild properties to bring proper use”.

The Leicester Journal reported in 1794 that ‘Leicester Spa is now in high perfection’, Yet it was unsuccessful and by 1798 to a General Baptist College had taken over the site, this became a private house and latter offices. It is remember as Spa Lane.

Another mineral spring was discovered close to what is now Fosse Road North in 1830 by a local market gardener called Isaac Harrison. As a result the area becoming known as Newfoundpool. At the site a Hydropathic Institution was built but by 1835 it was converted into a private residence, Newfoundpool House where the Harrison family lived. However, some of the baths remained open for occasional use. There was another attempt in 1853 to advertise them as having:

“these baths will be found equal, if not superior, to any other baths in the neighbourhood”.

However the revival did not work and when in the 1880s ,the area was being developed, the Hydropathic Institution became the Empire Hotel. This become derelict in the 2005 and was demolished to build a Lidl supermarket in 2014.

The only other surviving of the city’s water history is the Cank Well a plaque of which exists on Cank Street. 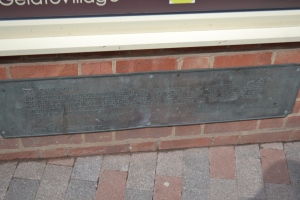 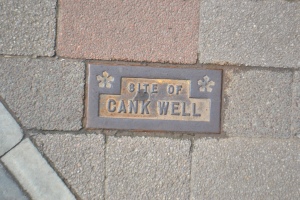 Local tradition states that it was famous as a meeting place of gossips, the word cank being a term for cackle. However, this might be folk etymology as in Leicestershire it is a name of a hard ferruginous (i.e iron rich) sandstone and it may record chalybeate (iron rich) and those healing qualities. Alternatively cank may refer to cancer and it was a curative well…but we can debate and gossip that all we want, there is no evidence!