During my research for Holy Wells and Healing Springs of Warwickshire one of the surprising discoveries is St Botolph’s Well at Farnborough. Surprising because in P.M Patchell and E.M. Patchell’s 1987 ‘The wells of old Warwickshire’ in the first series of Source 1 note that:

“The well is chalybeate and reputed to cure eye ailments, but is now only a cattle drinking place on private land. It is just a little way down the lane leading south from the church, at a little bridge.”

I had read this perhaps as being no more than the site being is an uninspiring boggy hole but this was not the case!

The earliest reference however to the site is William Dugdale in his 1730 The Antiquities of Warwickshire. He notes that:

“Near the house of Mr Holbeach there rises a Chalybeat Spring, called… St Botolph’s Well.”

As the parish church is dedicated to St Botolph and the settlement was in existence at the time of the Domesday book and it is probable that the well dates from this period being associated as it is with a Saxon saint. There is certainly a traditional relationship with the holy well as the relic of a path which leads down to the well from the church can be traced in the grass the other side of the road from the estate. This leads to a wooden door close to the well – although interestingly the handle is on the estate side suggesting permission in more recent times was needed. As noted by Stephen Wass in their 2012 thesis A Way With Water: Water Resources and the Life of an Eighteenth-century Park.
http://www.polyolbion.org.uk/Farnborough/Dissertation/A%20Way%20With%20Water.html#2

“Of further significance was the exclusion of the community from access to St. Botolph’s Well (Fig. 33). The arrangement of church, holy well and connecting thoroughfare was probably an ancient one which reflected the communal use of this spring for practical and spiritual purposes. What is striking today about the spatial relationship is that the seventeenth-century park wall cuts across the bottom of the former route and effectively restricts access to the well as it is now on private property.
A door in the wall, which by analogy to other local properties, appears to be eighteenth century (Wood-Jones, R. B. 1963.  Traditional Domestic Architecture of the Banbury Region), was provided to allow some access. This door could only be opened from the park side. Even allowing for the fact that the Reformation brought about a divorce between the established church and the idolatrous practice of visiting a holy well one must assume that on some level of superstition the well still occupied an important part in the community’s consciousness. What was communal has become private.” 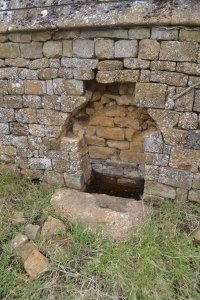 Healing waters and development as a spa

Francis Smith in their 1825 Warwickshire delineated

“A chalybeate spring rises at Farnborough, known by the name of St. Botolph’s Well, which was formerly resorted to by the credulous and superstitious, for its wonder-working miracles!”.

“its’ reddish water is said to be coloured by rust from the nails of the Cross”.

Which is an interesting and as far as I am aware a unique tradition. Does it suggest an association with a nearby relic?

Bates (1993) says that it had only a very limited reputation as a spa, and had fallen out of use by 1890, certainly there is no evidence of people visiting it and perhaps this was associated with the development of the estate by Sanderson Miller, the folly architect. However, its current structure although not a boggy hole is perhaps a little lacking the panache of a structure one would associate in a folly estate. 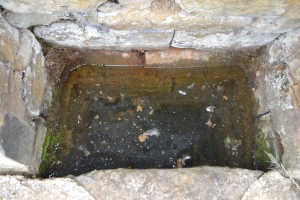 The current state of the well

The well is now enclosed in land owned by the National Trust. St Botolph’s well consists of an archway of red sandstone built into the wall surrounding the park which is a surprising arrangement and one would have imagined if it was developed a spa a more impressive arrangement would be found.  The water arises in a two foot deep rectangular chamber in a recess in the park’s wall. An arch of dressed stone covered the well but this has all but gone and either lays beneath it or else robbed. This notwithstanding the site was certainly more impressive than what Patchell and Patchell suggested and there were no cattle in sight! However, perhaps due to its ruined status it might not be far off becoming a boggy hole if its not repaired soon.