Some ancient and holy wells of the Holy Land

The arid land of the holy land is watered by a number of ancient springs. Perhaps the most famed is the Ain il-‘adra or Mary’s Well, a well which has served its Arab community well over the millennium. It is located below Greek Orthodox Church of the Annunciation in modern-day Nazareth. The church is so called because it is believed that the well was the location where the Annunciation occurred, Mary learnt she would be carrying Jesus from the Archangel Gabriel. 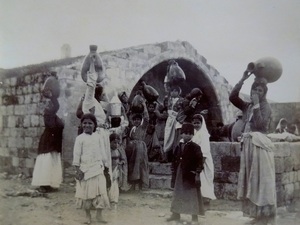 However, neither the Four Gospels nor The Koran mention her drawing water from the well at the time and it only appears earliest written account that lends credence to a well or spring being the site of the Annunciation comes from the 2nd century Protoevangelium of James non-canonical gospel which reads:

“And she took the pitcher and went forth to draw water, and behold, a voice said: ‘Hail Mary, full of grace, you are blessed among women.”

The spring itself was one which fed the ancient city of Nazareth, and it was called  ‘Spring of the Guardhouse’. Rae Wilson also describes “a well of the Virgin, which supplied the inhabitants of Nazareth with water” in his book, Travels in Egypt and the Holy Land (1824). An account in 1853 notes that:

“the water at this spring was very deficient this summer season, yielding only a petty trickling to the anxious inhabitants. All night long the women were there with their jars, chattering, laughing, or scolding in competition for their turns. It suggested a strange current of ideas to overhear pert damsels using the name of Miriam (Mary), in jest and laughter at the fountain of Nazareth.” 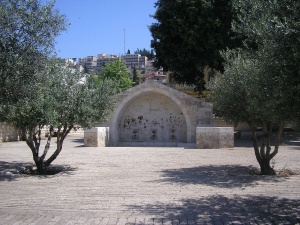 The present semi domed structure appears to be largely symbolic and no longer functions, although it was still used as a local watering hole until 1966. This was undertaken in 2000. During the late 1990s, evacuations revealed underwater systems suggestion its use as the town’s water supply from the Byzantine period and a separate accidental discovery revealed an underground bath house with Carbon dating it from the 1300s at the latest.

Hammat Gader’s mineral springs, one cold and four hot, fill the remains of a Byzantine bath house complex. Another Roman spa can be found on the southern side of Hammat but not as well preserved. The name Hammat means hot spring in Hebrew.

Another Mary’s Well is found in Jerusalem and is so named after the belief that she stopped there for a drink whilst visit John the Baptist’s parents and as a consequence it was a source of pilgrimage. Little can be found out regarding its history but it is thought that the spring has been used since the Bronze Age. The well is covered by a 19th century mosque. 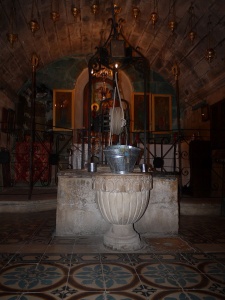 More prominently mentioned in the bible is Jacob’s Well or Bir Ya’qub now lying in the Eastern Orthodox monastery named after it in Nablus. The Book of John states that Jesus:

“came to a city of Samaria called Sychar, near the field which Jacob gave to his son Joseph, Jacob’s Well was there.”

It was at this location that a Samaritan Women spoke to Jesus according to the Gospel of John.  By the early 300 AD it is believed that the well was being used by Christians for baptism and by 380 AD a church was built over it according to Saint Jerome which survived into the 500s. Another church was built in the 700s but this was ruinous when the Crusaders mention the well as no church is mentioned. However, the Crusaders built a church for an account from the 12th century noted:

“it lies in front of the altar in the church built over it, in which nuns devote themselves to the service of God. This well is called the Fountain of Jacob.”

This church fell in 1187 during Saladin’s raids. For over 700 years, no church was built over the well and only ruins are noted as being nearby, then in 1860, a Greek Orthodox Church was constructed but this too was lost to an earthquake in 1927. But the site was rebuilt to resemble a Crusader church where the well is enclosed in the crypt where it now consists of a winch well complete with its bucket surrounded by icons and votive candles. Its deep burrowed into the rock is 41 feet and still contains water.