Is there a lost St. Helen’s Well…in Maldon?

No survey can be thorough and frustatingly one always finds new sites or details on them after publishing as the books are a series I intend to write an appendix to list the new Essex sites I have discovered or have been informed about. One such site, mentioned in the gazzatteer of named wells in the book has now revealed itself to be a possible holy well dedicated to St. Helen. I look at the evidence and hunt for the remains of this site.

So many St Helen’s Wells?

Harte (2008) notes that St. Helen is the most common dedication for wells with 40% of all sites named after saints being given the dedication 50 sites in his work. I hestitate to add another to that list which both he and I were unaware of when compiling my work on Essex sites.

St Helen developed at special folklore relationship with England, thanks to authors Henry of Huntingdon and Geoffrey of Monmouth. They claimed that she was the daughter of Cole of Camulodunum a British King and ally of Constantius. Support for this belief perhaps coming from the fact that Constantine was with his father in Eboracum (York) when he died and that her son picked up Christianity in the province. This scant lack of evidence did not appear to have affected mediaeval minds who even suggested that Colchester’s St Helen’s Chapel was even founded by the saint and she became patron saint of here and Abingdon.Folklorists and historians have debated the origins of this myth. Some have seen her derived from an equally dubious St Helen wife of Magnus Maximus or Elen a probably invented pagan goddess

A holy well or well by association?

The only written reference to St Helen in the town, is to St Helen’s Chapel which is mentioned in 1529 will of John Padgett leaving money towards the costs of the construction of said site. However, the date is so late it is unclear whether the chapel was ever built being so close to the Reformation. No remains bar the name of the well and the lane/crossroads. No the question is, is the well named after the chapel or the chapel named after the well. There could be support for both arguments. In support of the later, one might question why a chapel is being built so late, is it built to capitalise on the spring’s importance. The only problem with this being that it does appear to be unlikely that the spring would not have been recorded separately. It is certainly an ancient site, its situation on the site of the original saxon burg is suggestive of its importance to that settlement. Furthermore, early maps show a site called Maidenspond in the area approximating to where the spring is situated. Does this suggest a Christianisation of a pagan site, the only record of which is the name Maiden? Is it a coincidence or significant that Colchester’s St Helen’s Chapel is in Maidenburgh Lane? For the contra argument, there is Essex precedence, Colchester’s St. Helen’s Chapel was situated by a well called St. Helen and the naming of holy wells by association is frequently encountered across the country. It has been also suggested that St Helen chapels or churches were often renamed All Saints and indeed St. Helen’s Well is in All Saint’s parish. There is of course an All Saints Well in Colchester as well and Ipswich has a St Helen’s church so being midway between the two it may be genuine.

Later life as the Cromwell?

The spring itself does not appear, above notwithstanding, until 1587 when Thomas Cammock paid for Maldon’s very first convenient water supply piped in a 600 yards lead conduit from his well in Beeleigh Road (the ‘Crom’ or ‘St. Helen’s Well’) to a pump on St. Helen’s Lane (now Cromwell Hill). The name Crom probably derives from O.E. crumb for crooked and may explain the winching equipment or its difficult position to get to, which describes it well now as the actual spring head does not appear to be traceable.

In search of surviving relics

Fortunately, two relics survive, the ‘cromwell pump’ on Cromwell hill and the cistern which feeds it above it in a private garden on Beeleigh Road and as such is not easily accessed. The pump, cast-iron shaft with spour was constructed in 1805. It is situated on a rectangular stone platform with brick plinth and stone slab well cover. The whole structure stands within a granite kerbed enclosure with a retaining wall with steeply raking top and curved corner to north. To the south-west is the lower part of a square brick chamber with stepped opening to street which may have been used to provide water for animals. The supply came from the cistern house which originally would have used the water from ‘St Helen’s Well’. This cistern house has structure dating from 1587 and 1805. It is red header-bond brick with Roman cement-rendered dome. with a circular brick structure with narrow entrance door, enclosing water cistern which is full of water and drains into a small pond nearby. Over the door is a stone lintel with panel inscribed ‘REBUILT BY SUBSCRIPTION 1805’ in Roman lettering. The only pictures of the cistern show it overgrown with ivy and slightly derelict, but is pleasing to note that the present owner undertook a fine repair job replacing the original acorn finial and Roman cement and ensuring the water supply does not overflow the chamber by repairing the piping. 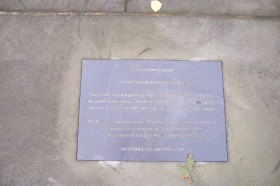 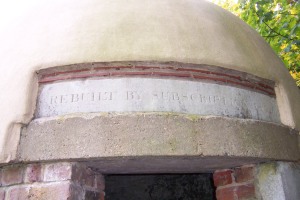 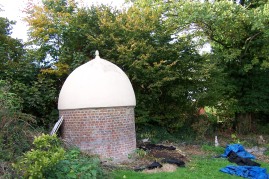 Jones, G., (1986) Holy Wells and the Cult of St. Helen. Journal of the society of Landscape studies.