In the book Holy wells and healing springs of Nottinghamshire I detail the existence of a holy well in the riverside village of Ratcliffe on Trent just south of Nottingham. Details regarding the Holy Well of Radcliffe-on-Trent are scant. So far research seems to suggest it is a site which only appears post-1800s and whether this is due to poor recording or some developing Victorian antiquarian fancy is unclear. The first reference is 1801 as a Holy Well Close in the vicinity of the present Park Road. The next mention was in about 1844 when a Jonas Bettison sold just 35 acres in Cliff Hill Close and Holywell Close to Earl Manvers for £4500. 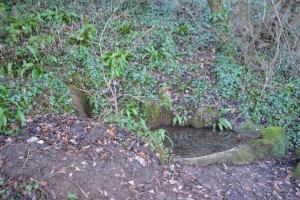 However, there are no traditions associated with the site. More recently according to Mr. Priestland, the name Holy Well has been associated with a site on the pathway down from the Cliff Walk to the level of the River Trent with its upper end opposite the northern entrance to the Rockley Memorial Park. He notes that the site has been described as Halliwell, Hallow Well and Hollow Well suggesting its name derives from O.E hol.

When I researched for the book I went along the path and discovered a spring, half way down the steep pathway, which formed a pool of water which is circled by large stones and went down to form a small stream which was dammed to form a further pool a few metres below the first although. This I assumed was the holy well and I published it as such.

However, correspondence from fellow holy well enthusiast Jane Fulford suggests I was close but not actually there and that the holy well was close by in what I could describe as the most precarious of locations on the very steep slope opposite.

Rather cautiously I went to look for it. It was not easy although I had been given excellent instructions I could not work out whether it was better to go down to it or go up to it. I managed to locate from the bottom and thought I’d work upwards to it. The slope was slippery with very few footholds or grip points. I nearly managed it before slipping back into the boggy water below. Taking the downwards approach looked preferable. 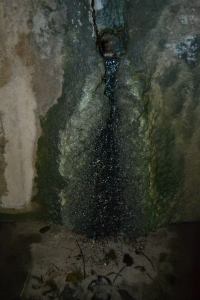 Once I had located I found myself some safe footing and examined it. At first what was apparent was that it was still flowing and with some considerable flow. The present well house is constructed of what appears to be Georgian brickwork with a cement render, much of which was missing. The structure like a dog kennel in structure a few feet high, I needed to crouch down to examine it. Once inside it, one could see the curved brick barrel like roof and it was apparent that the flow had petrifying qualities. as the overflow was considerably encrusted. The structure was unfortunately heavily overgrown with a large ivy making considerable impact on the infrastructure, so much that I fear that it may not survive for much longer.

The well certainly more authentically like a holy well than the site I first thought was it; although they may well indeed feed off the same spring. The only extra piece of information that Jane Fulford informed me was that the water was used by those using the waterways although we both agreed that its positions suggestions that was very improbable. Be very interested to find out more.