Missing from the gazetteer!

Sadly, when producing a book on a topic which has never been produced before, you can miss something. Queen Anne’s Well is one site I missed. I knew nothing about it, but a brief mention as it happens by the Friends of Bedfords Park. Asking at the visitor centre the name was well known and I was given clear instructions. Expecting to find some boggy hole, the site as can be seen is far more impressive and certainly fabric wise one of the county’s best ancient wells.

The well consists of a brick and sandstone arch well house set into a bank. Inside the well house is plastered brickwork and sits up a small platform. The water arises in a roughly rectangular aperture and flows to fill Nursery pond below. A gnarled tree grows over the well holding some of it together, although the quoin stone is missing, which may have given some clue to its origin.  The structure is quite substantial and well built. Water from the spring fills lower Nursery pond. There is also a nearby brick lined reservoir, not necessarily linked, which was the mansion’s domestic source being pumped by a pumping engine. 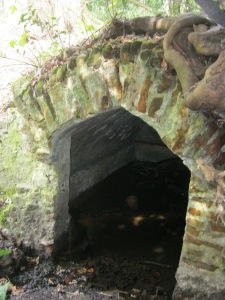 The spring may be the reason for the original settlement as Bedfords Park providing a valueable source of water. According to Mrs Lois Amos of the Friends of Bedfords Park it was known way back in the 16th century and onwards as ‘Belfonts’. This is an interesting thought if it derives from OFr belle meaning ‘good’ or ‘reliable’; and indeed there are small number of healing and/or holy wells called bonny well which has a similar derivation. 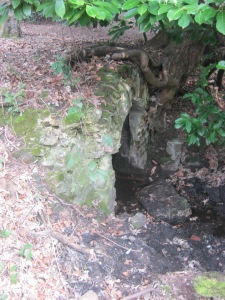 However this is at odds with the view that it was named after a John Bedford who held the land in 1362 and built the first manor. It would be apparent that etymological issues have happened here.

This notwithstanding this does not explain how old is the well? Is it a mediaeval? Tudor? Or a folly or Victorian piece of gothic? The lack of embellishment or indeed history suggests that it the site is not a result of any landscape improvements in either the 1700s or 1800s.

The fabric may give the best evidence. The well is not built wholly of brick, which would suggest a post-1600 construction perhaps, but a high quality green sandstone. This is noted by Nigel Oxley, the Boroughs buildings Conservation Officer that such a high quality material used in a number of local churches, emphasising its importance. It is similar to that of Charlotte’s Well in Stratford which suggests a Tudor origin. 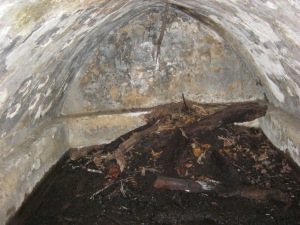 Maps can be an excellent source and being enclosed within an estate one would expect some reference to it. However, it does not appear until an 1896 Ordnance Survey map which even then shows it simply as ‘Spring’. The absence of the site from maps is no indication of a lack of age, but it is curious. Simon Donoghue,  Havering’s Local History Librarian, produced an excellent guide to the estate and no mention is made of the well.

Bedfords Park is in the London borough of Havering, nearby being Havering atte Bower, which has been a Royal manor since the 8th century. It would appear that Havering-atte-Bower, a Royal property can be cited as the source for the Queen. However, in the late 1300s, the King’s Sergeant lived in the manor who was in the service of Richard II’s queen – Anne of Bohemia. James. However, it is Henry’s wife Anne of Boleyn is the most likely perhaps.

The cult of Queen Anne

I believe that the significance of the occurrence of wells associated with Anne Boleyn has been missed by researchers. Ann was a convenient figure to apply to wells at a time of flux. The cult of Saint Anne and its association with wells is a relatively recent one, dating from the 15th century. Could it be that at the Reformation, that local community or rather a local landowner, realising that the population would have divided into those following the old ways would focus on re-dedication to this popular Queen. Anne was of course, the mother of Elizabeth, the first Protestant figurehead, who herself had a cult and feast day associated with her.

Evidently she has a name which can be conveniently transferred to St. Ann Wells especially as like Ann she was the mother of Elizabeth the founder of English Protestantism. I have noted before how Queen Ann has been associated with springs, however dubious.

Sadly, there is no evidence and I write this post hoping someone can help. However, I do believe that the weight of circumstance and likelihood suggests that the well which exists in Bedford’s Park predates its association with Queen Anne and was probably a St. Anne’s Well.