Back in the mid 90s when I started seeking out holy wells, I came across reference to a site just outside of Thetford. I’d planed to visit the site and found it to be one of the most curious in the county. It is marked on the first series of the OS map in Gothic writing but was it that old?

A substantial site is located in Shadwell Park called St. Chad’s Well (TL 933 830). However, despite the name I can find no history or traditions about it, the first author to refer to the well is Bryant (1901) who states it is marked on an ancient map but as I note below I have been unable to substantiate this.    Was it an ancient well?

The well is enclosed is a circular dome of flint and mortar with a passage entrance facing west. The structure is supported by a stone pillar. The structure is not dissimilar to an ice-well which indeed it has been claimed it was but no-one would build an ice-well with a spring in it. A medieval fabric claim was made, but  is of probable 19th Century date and is an estate folly; a grottification of a simple spring, utilising old stone work.  This spring arises from the hillside and enters into a basin kerbed in stone through a hole in the flint wall of the structure. Above this is an arched recess. The water is channelled into a narrow gutter to exit through the north wall. The concrete floor of the chamber is below ground level reached by five stairs in the passageway. There are two lighting niches in the walls at the east and the southwest. Six stone blocks are arranged to form seats. Below the arch of the spring of the arch of the domed roof are six brackets which possibly served as candle stands. 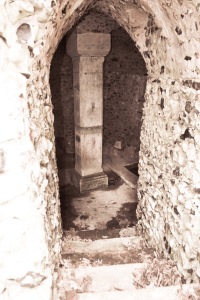 Unlikely although St Cedd his brother evangelised East Anglia, Chad wells are very common in the region. This is because they arise from the Old English Chaud meaning cold and thus cold spring! In this case it is apparent that the name may well be a back-derivation as its location on East Hall and Gonville Manors boundary suggests name derives from O.E scead for ‘boundary’ this is emphasised by the name of the estate Shadwell – sceadwell! Indeed the estate Shadwell Court is only first mentioned in White (1845) as the house was built in the 1830s with associated statues. Historic England records:

“Robert Buxton acquired the manor of Rushworth in Shadwell during the C16, initially holding a lease from the fourth Duke of Norfolk. In c 1715 John Buxton, amateur architect of Channonz Hall in Tibenham, began to rebuild what he called Shadwell Lodge and to lay out the grounds. The main features however of the design which survives today (1999), including the layout of the plantations and the creation of the lake, are the work of his son, also John, between the 1740s and 1760s and these are recorded on William Faden’s map of the county dated 1797. “

This suggests the well was a folly capitalising on the spring name using the carved stonework which may have originally been part of Thetford Priory, giving it a rustic religious feel. However this does not mean that the well was not of significance. Boundaries often incorporated springs as sites of note, or as disputed sites and having them on boundaries allowed equal access. As many Parish boundaries date from Angl0-Saxon periods it is possible that the well had a significant position in the settlement. There is evidence of an ancient settlement here with flint flakes and blades from the Neolithic and Bronze Age were found around the well and Roman funeral urns and Saxon tumuli in the park. Furthermore the well is also located close to Peddar’s Way, suggesting pilgrim use perhaps. So was it a Holy well as noted 1870-72, John Marius Wilson’s Imperial Gazetteer of England and Wales:

“SHADWELL……It takes its name from a spring called St. Chad’s well, formerly much frequented by pilgrims.”

This begs the question is this just antiquarian fancy or are we missing some records of its history? Was it frequented by those on the way to Walsingham…if so its forgotten by them now. 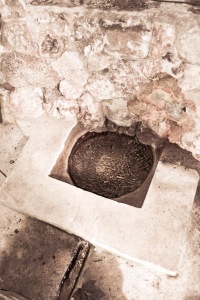