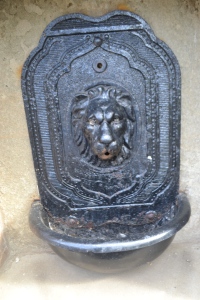 “by the side of the ditch arose a spring, which superstition consecrated to St Ethelbert, there is a handsome old stone arch erected over it.”

Hereford’s St Ethelbert’s well sadly does not have a handsome old stone arch over it but down on Castle Green the site of the well is still marked. It is a well with a good degree of pedigree being first mentioned on a 1250 deed which in referring to a property records:

“a road leading towards the former fountain of blessed St Ethelbert”

Similarly a grant in 1359 to a John of Evesham refers to:

“the lane leading to the well of St Ethelbert”.

The cult of St. Ethelbert

I have discussed the martyrdom of the saint in a previous post but it is worth recalling two traditions. One that as the body with its decapitated head was being carried to Hereford it fell and tripped over a blind man who was miraculously able to see. The other is that this was a resting place for the coffin before transfer to the cathedral but it is not mentioned in his main Vita. His body was transferred to the cathedral and became a shrine lost in the reformation. In 2008 a shrine surrounding a pillar near the high altar was established it shows scenes of the saints martyrdom.

In 1802 the well ‘appears on a plan… drawn as a circular feature enclosed by walls and approached by five stone steps. It was situated in the eastern corner of a garden soon to be occupied by St Ethelbert’s House’

By Wright (1819) A Walk through Hereford he was noting that:

“Some disjointed remains of this arch may yet be noticed; on each side the door in the modern wall are key stones, ornamented with foliage or corolla, with terminations of rib-work. In a niche above, defended by an iron palisade, is a head, wearing a crown, carved in stone; it is part of the image of St Ethelbert, which formerly stood in a niche on the ancient west front of Hereford Cathedral… The well is now provided with a pump erected and kept in repair during her life-time, by the late Johanna Whitmore, of this city.”

Thus by 1869 Havergal notes in Fasti Herefordenses and other Antiquarian Memorials of Hereford:

“the superstructure has long since disappeared, and the well itself is entirely excluded from sight by four brick walls and a vast accumulation of rubbish.”

In 1904, the original site was stopped up, although it was said then that a circular stone within Mr Custos Eckett’s garden marked the exact position, but that exact position itself was lost.

James Brome in his 1700 Travels Over England, Scotland and Wales stated that the well was:

“by the Trench near the Castle… a very fine Spring, call’d St Ethelbert’s Well, famous formerly for Miracles.”

“a beautiful limpid spring, formerly much reverenced; and even now in great esteem for its medicinal properties.”

“the place is still visited by person s afflicted with ulcers and sores, to which the washing is often very salutary.”

“many wonderful cures are said to have been effected at this well.”

W. J. Rees in their 1827 The Hereford Guide says that the water was:

“reputed to be of service to persons afflicted with bad eyes, ulcers, and sores of various kinds.”

“caused the cases to be ascertained in which the use of the water was of service.”

Yet in December 1822 when the water being analysed by Mr J. Murray:

“his opinion was that the medicinal qualities were not very important”.

It would appear if Wright is correct that it was traditional at some point to give a pin for he notes:

“In cleaning it out for that purpose, a great quantity of pins were found in its bottom.”

Watkins 1918-1920 noted that there was more than one site which claimed to be the well indeed there were four. These were as well as to the circular stone where the medieval well-house had been, and the new drinking fountain there was also:

“a pump and well in Dr Du Buisson’s yard in the line of the ditch…..a flowing spout of water, formerly running close under Castle Cliffe house at a spot which is, or ought to be, a public watering or landing approach to the river, and which ceased to flow on being cut off in laying a main sewer in 1888. Half a century ago my father investigated the possibility of bottling this water (with its medicinal reputation and attractive name) and secured its analysis, but was much surprised to find (in its organic impurities ) stronger indications of an origin in at own ditch than in a rock spring.”

Whitehead records how this drinking fountain was erected in 1904 and has been restored twice once by the Hereford Civic Trust and rededicated by the Right Reverend J.R.G. Eastaugh, the Lord Bishop of Hereford on St Ethelbert’s Day, 20 May 1978’

Sadly the waters are now not obtainable for Sant (1994) says it dried up during building works after the war. Today the sadly worn face of Ethelbert stares over a dry lion’s head.