A Warwickshire field trip – the sad story of Margaret’s well

Whilst researching for a future volume on holy and healing wells in Warwickshire, I came across an interesting site called Margaret’s well. This site one would assume takes its name from a saint, but no, showing how easy it is for holy well researchers to be confused. However, this site has a far more interesting origin, it is cited by some as being the site where a local girl committed suicide. That in itself, although tragic, is not perhaps that interesting, but the suicide may have been the inspiration for the tragic character of Ophelia who drowned in William Shakespeare’s Hamlet.

For those unfamiliar with Hamle: Ophelia loves and was courted by Hamlet, Prince of Denmark, but is helpless when he starts behaving strangely after his uncle marries his mother, having killed Hamlet’s father. After, Hamlet treats her poorly and abondons her she goes mad and drowns in a pool prompting the Laertes and Hamlet duel which results in both dying.

Margaret Clopton, was the daughter of a leading Catholic family in the town and was a contemporary of Shakesphere. She was abandoned by her lover, drowned herself. News of her death would have reached Shakespeare as the family was so well known even if he was living in London especially as his wife, Anne Hathaway still resided in Statford. The dates certainly match, Hamlet is believed to have been written by the Bard in the 1590s, shortly after Margaret’s supposed death. 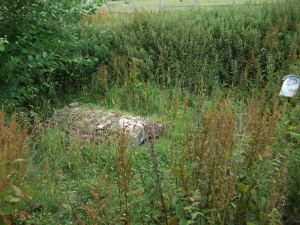 Searching on line for evidence, I found the following website: http://www.theanswerbank.co.uk/History/article/whats-the-evidence-for-ophelia/

In it a Dr. Bearman, who is the chief archivist  at the Shakespeare Birthplace Trust, said the evidence was open to interpretation, but a possible link with Ophelia could not be denied. He stated that although there was a Margaret Clopton there are no records of her marriage or death which would lead you to suspect she died in infancy or early youth. However, he does note that there is a tradition of a young woman drowing in the well and the death is first recorded in  Jordan’s History of Stratford written in1790. Whether this was Margaret and whether this was the source perhaps can never be proved! Indeed the vagueness of a ghost haunting the well may suggest a religious origin? Is the Margaret St Margaret?

The well built as a conduit for the hall was constructed in 1686 as the inscribed stone SJC 1686 records. The SJC refering to Sir John Clopton, but is obviously a pool or well before this but nothing is recorded. The site was for many inaccessible for years due to its being immersed in thick briars, bramble and boggy underneath and only the very top of the stonework being visible. It was decided in October 2002 to restore the well and a new path was laid to it, the work being completed in 2003. Archaeological field work once the land was drained revealed the brick vaulting, steps and flagstones.  Masonry foundations were were found south-west of Margaret’s Well, and may have been remains of arbours shown on the  1848 Tithe map and estate plans of 1849.Once the private estate of Clopton house, the site now in a public park.

Visiting in 2011, the site is marked out by a fence and has a small plaque, but unfortunately this and the well itself have been vandalized. The well which consists of a barrel shaped structure over a rectangular pool has lost some of the brick work from the top and the concrete rendering. The water arises clearly from within, but I could not see the carved stone described.