Whilst in Australia I was able to visit two water related sites with associations with indigenous or Aboriginal folklore and legend. The most famous is the Babinda boulders and in particular the Devil’s Pool in North Queensland is known in Aboriginal legend as a cursed place and has features not dissimilar to that one would find in England. The curse according to local tribesmen is related to the story of a woman who ran away from an arranged marriage with a respected elder with a younger man. When she was captured and threw herself off and created the boulders, waterfall and pool. She waits for her lover and is said to cause people to drown, 17 people in all according to wikipedia.

On Wikipedia, a local, Annie Wonga, gave this account:

There was a tribe that lived here. In this tribe was an elder, and his name was called Waroonoo and Waroonoo was promised to a girl called Oolana. When they got married, they had a big dance. As they went dancing a wandering tribe passed through and they welcomed them. In this tribe was a handsome young warrior and his name was Dyga. Oolana fell in love with him, and he fell in love with Oolana. While they were dancing, they decided to run further up the creek and camp there overnight. And at the morning, the wandering tribe and our tribe saw that they were missing. So they went in search of them and they said to Oolana, “You’ve got to come with us.” And his tribe took him away. And when she saw that, she just came and she threw herself into the creek. She loved him that much. And there was a mighty upheaval, and rocks were strewn everywhere and where she lay is now called the Devil’s Pool. And every now and again she might call a wandering man to her, thinking that it’s Dyga.

She is said to haunt the place and 2009 a woman is said to have captured the image of her in the pool, local Aboriginals state that the 17 people who have died did so because they did not respect the place.  It is a remarkably peaceful and frightening place in one stroke. 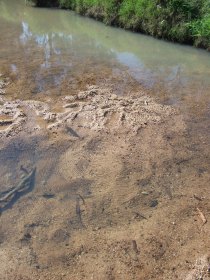 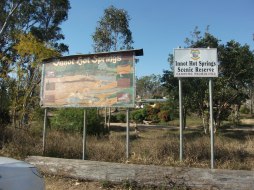 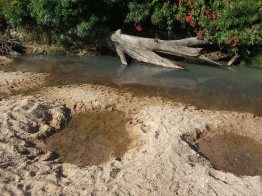 The Innot hot springs are perhaps less well known outside of the country. However, they have to be the hottest springs I have ever experience, one can bearly stand a few minutes with ones foot immersed. A Dreamtime legend is told of its creation. The origin of the spring has an Aboriginal legend. This tells how a father and son would regularly go out collecting Sugar Bag (wild honey). Often the father would leave some of the honey for the spirits to ensure its continual provision. However, often the son would eat it and would be scolded by the father. On one occassion whilst eating the honey, a Yamanie (a snake) came behind him and swallowed him making a thumping sound which caught the attention of the father. He can running back and tried everything to make the creature look the other way. Finally he threw a gunamore or sweat potato in the river to catch its attention as it turned around the father cut the creature’s head off. The serpent lay in the water bleeding, steam began to rise and it became hotter and hotter because the Yamanie’s temper was so great making the hot spring ever more.

The water supposedly used to fill a large pool of overflowing water which was large enough to allow 50 people to bath in it. In the 1890s two hotels (pubs for non-Australians), a bath house and a weekly coach from Herberton were established. In 1891 the Australian Medical gazzette stated:

the springs have gained a reputation for their curative properties in chronic rheumatism, goat, liver and kidney disease.

Water was placed in barrels and hauled by mules across to the coast and was sold in Townsville by the Innot Spa Waters Ltd and as far away as back into Europe until the first world war. The water produced today fills temporary pools made by local people along the Creek, although a bath is to be found in the camp nearby. The temperature is 71.5 0C and issues at three litres a second.