The Holy Well of Our Lady of Willesden

Sometimes holy wells turn up in odd locations and the survival of a site in a very urban cityscape shows how such sites can survive despite the predations! For in the church is a pump which draws its water from the newly discovered spring found in the boiler house said to be St. Mary’s Well associated with a shrine to the Blessed Virgin or Black Virgin of Willesden. The origin of the shrine is unknown, but the first mention of a statue occurs in 1249, when an inventory of church goods mentions two large sculptured images of Our Lady. Legend has it that the shrine originated due to an appearance of Our Lady Mary in the Churchyard. 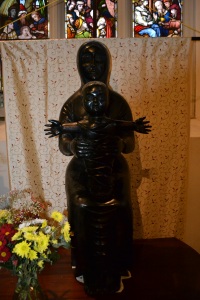 The celebrated black image of Our Lady was a centre of pilgrimage until its destruction at the Reformation. In 1535 the statue was torn down and taken to Chelsea and publicly burned on the same fire as the statue of Our Lady of Walsingham. Consequently, Henry VIII imposed a fine on the ‘idolatrous’ Church to be paid every year by the Priest and indeed it is clear that interest in the shrine did not wane at the destruction of the image. It is noted that a vision of the Holy Trinity was seen by a Dr. Crewkerne who in a conversation in with Our Lady, telling him to preach abroad and that she wished to be honoured at Ipswich and Willesden, as she had been once before. A restoration never happened during this period however. However, when Fr. James Dixon became Vicar in 1902, he restored the shrine and a statue of Mary and Jesus was placed in the Chancel and devotion to the shrine has been encouraged. In 1972 a new statue was made and pleased by the Bishop of London on the feast of Corpus Christi.

Of the well, J.T Gillet’s 1964 The History of Willesden notes that:

“There is a distant tradition that Our Lady appeared in an oak tree in the churchyard to a client, and that a well began to flow, at which miracles were wrought and which became noted for cures from blindness. The well was used until comparatively recent times, but then it was condemned as ‘unsanitary’ and was covered over.”

Jeremy Harte in his 2008 English Holy Wells notes that the tradition also appears to date to 1885, and was thus probably propaganda set up by a Catholic mission was set up to revive the mediaeval Marian shrine at Willesden, although the VCH (1969–2004) take it as evidence that:

‘the church was built on the site of a holy well possibly that which gives the settlement its name, first recorded in 939 by King Athelstan.’

An alternative tradition is recorded by John Norden in 1596. Norden (1723) Speculum Britanniæ: an historical and chorographical description of Middlesex and Hartfordshire which notes in relation to Alderman Roe’s a:

“springe of faire water, which is now within the compass of house”.

However of course this does not stipulate that this is a holy well nor the exact spring. Similarly, it is likely to refer to Willesden from the Anglo-Saxon Wiell-dun – hill of springs as noted in Nicholas Schofield’s 2002 Our Lady of Willesden, a brief history of the Shrine and Parish who also state

This is said to have been associated with pilgrimages to the Virgin’s shrine. The church website notes that:

“The water from the well is used extensively to this day, for Baptisms, anointing and mixing with the wine in the Chalice. On Saturday 4 July 1998, at the Annual Willesden Pilgrimage, a new Holy Well was dedicated enabling the healing Waters of Willesden to flow freely at St. Mary’s. The waters are available to be used in Church and to be taken away.”

Interestingly Foord appears to describe it as:

“in regard of a great cure which was performed by this water, upon a king of Scots, who being strangely diseased, was by some devine intelligence, advised to take the water of a Well in England, called Muswell, which after long scrutation, and inquisition, this Well was found and performed the cure’. Later this king was identified as Robert the Bruce (the Bruces held land nearby), and the illness was held to be leprosy.”

However is this another site?

The well is although described as now surmounted with a pump within the church, this appears to have gone and now a demijohn of water is found in the Lady Chapel. Apparently the source was rediscovered in 1998 but access cannot be granted. 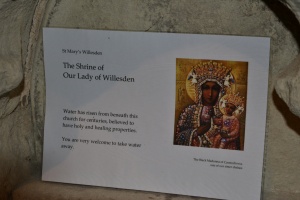