Whilst researching for my Holy Wells and Healing Springs of Warwickshire there as in many counties a few wells which question marks are placed over. The Wikipedia entry concerning the village states it all:

“Berkswell’s toponym is derived from the Berks Well, a 16 ft (5 m) square, stone-walled water well just outside the churchyard. It is said to have been used for baptisms by immersion[citation needed] and can still be seen today.”

That all too familiar term now thanks to Wikipedia – citation needed – is what I often want to cry out when discussing many assumed and often famed holy and healing waters, who’s histories and holiness can be a murky as their waters. Berkswell’s well is a classic example of an assumed holy well, often cited in books and articles on the subject and taken for granted as one. This one, being a large stone tank about five feet deep enclosed by a 15 feet by 15 feet stone wall, appears to be a classic baptismal well and such amongst many neo-pagans and Earth mystery enthusiasts it is one…but is it? 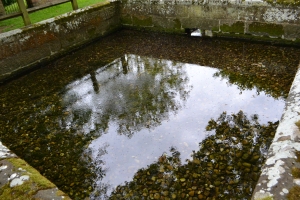 Who’s well is it anyhow?

The well is certainly an old one if the Domesday is anything of an indication. Noted as Berchewelle, W.H. Duigan (1912) in his Place-names of Warwickshire states that it is Beorcoles well or Beorcol’s spring, the Beorcol(e) in question we assume is a Saxon landowner. However it could equally be berc for birch. But does that really matter? As the name is a secular one it gives little clue to the origins.

However, it is not the neo-pagan and Earth Mystery speculators who are the only ones the Parish Church of Berkswell unequivocally quotes:

“The Christian faith came to Berkswell when the village was just a cluster of huts gathered round a well, in the great Forest of Arden – which, in the centuries before the Norman Conquest, covered a large part of Warwickshire.

The well remains to this day, outside the churchyard gate, and it is here that the monks, who brought the faith from Lichfield, would have baptised their converts. We think that the name of the village derives from that of the Saxon landowner, Bercul. The present preaching cross, just inside the churchyard, a medieval replacement of an earlier, perhaps even dating back to Bercul’s conversion in the 8th century.”

Interestingly it is noted that the church even claim that the well’s founder (for want of a better term) was even baptised in it – a big leap of faith. The other claims is the piece again I have been unable to ascertain. 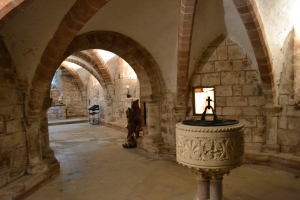 Location is the obvious factor in considering this site to be more than a village springhead. It lies a few yards from the churchyard of the parish church of St John the Baptist. Such a large springhead would have not only provided a valuable drinking source but as the church website notes an ideal place for baptism. The church itself may provide further physical and etymological based evidence. The latter is perhaps a little glib, but naming a church after the famous biblical Baptist may be a considerable indication or else the source of the mistake. The best evidence for its significance lies below the church itself, the crypt. This is the gem in the village, a beautifully preserved Norman crypt. Such a crypt in a small village church indicates a greater importance for the community and it was likely to be a shrine church and the church a minster. The topographer John Leland believed that the 8th century Bishop of Worcester, St Milred was buried there. Sadly there is no corroborate evidence but this would although in a Jethro Cossins and the Rector H. W. Watson said they discovered Saxon stone work, possibly the base of a tomb, when digging in the crypt. Other Saxon fragments have been found subsequently indicating that there was a church here in Saxon periods when the well was named. It should be noted that there have also been traditions about the water being good for eyes but that is no firm evidence either way of course.

However if this was the case why does the well have a secular name? Documentary evidence may reveal who the name. A Bercul is noted in a 748AD document drawn up by Mercian King Ethalbald which granted the church indemnity from any services or taxation. So the name was a significant one in region Berkswell would lay. Yet the two are not necessary the same.  Examining the structure of the well a plaque reading:

The date of 1831 suggests that the present structure is no older and such a design would have had a considerable use for the villagers being ideal to wash clothes in. Certainly it would be too late for any baptism use, certainly linked to the parish church. If any baptism was undertaken it may have disrupted the real domestic use and would have been by non-conformists. However, again there is no record of such non-conformist use in the parish. So we draw a blank. Despite this I feel that the well is too significant a springhead to have not been utilised by the church. However, we may never really know – that does not matter for many well enthusiasts and peering into these bright bubbling waters it is easy to feel the natural sacredness of the spring.