← A pilgrimage to Walsingham’s holy well
In search of Fonti Su Lumarzu, Bonorva →

If you go down to the woods today….Rebra’s Well, Wargrave, Berkshire

If one walks up a small lane into the woods above Henley on Thames, just north of the village of Wargrave is one of the country’s largest, most attractive but little known wells. A holy well, although the evidence is lacking to confirm, but a source who’s Victorian community was so much dependent upon that the local vicar decided that it must be Christianised once and for all.

That the site has ancient origin is probably indicated by the name, Crazies hill, some authorities believe it which from the O.E cray meaning clean water and its waters were said to be health giving probably because of the local water was boggy.

Its old name is said to be Rebra, although it is known as Rebekah now, named after the Old Testament prophetess, indeed the Rebra name sounds more like a contraction of this than an original name as there is no evidence of its name before the current improvements. These improvements were down by the local Reverend Greville Phillimore who in 1870 decided it was necessary to improve and sanitise the supply. It was subsequently called Phillimore’s spring. 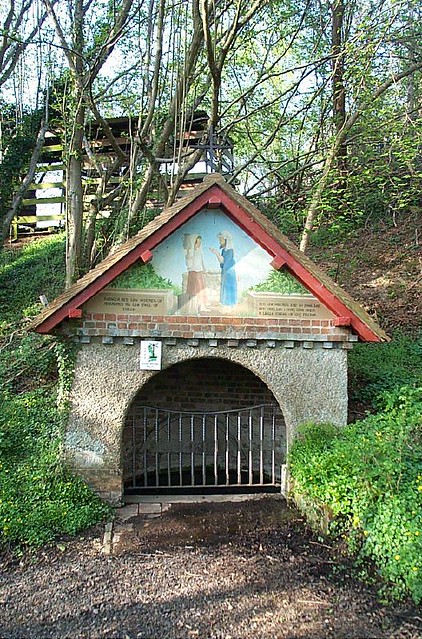 Phillimore constructed a considerable building for the well. The spring flows into a round shaped basin which is enclosed in the arch of a 10 foot high brick edifice, plastered over to an exposed brink face upon which is the well’s most eye catching and unique facet, a painting which illustrates Rebecca and a servant, standing at the well of Nahor. Either side of the scene as the following inscriptions:

“Rebeka and the Servants of Abraham at the well of Nahor. And the servants ran to meet her and said let I pray thee drink a little water of thy pitcher”.

The well house has a conical tiled roof with gabled frontage with an iron gate which prevents the idle falling in perhaps. At the back is a caved stone inscription with a stone in a segmental stone panel. The structure deserves to be better known being that its artwork was designed by famed garden designer Gertrude Jekyll (1843-1932) and thus makes it unique in the country.

“let I pray thee drink a little water of thy pitcher”

So said Abraham when he met Rebecca at Nahor and she was is remembered as providing water for Mesopotamian camels. Therefore as someone who provided water for thirsty villagers of this small Berkshire community.

← A pilgrimage to Walsingham’s holy well
In search of Fonti Su Lumarzu, Bonorva →