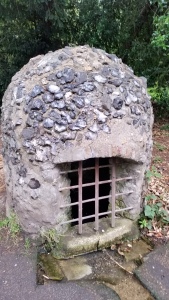 Sometimes there are some curious places for find an ancient healing well. Tucked in a sub-urban park on the outskirts of London is one such location. Nestling as an oasis of calm between busy streets and shops is Valentine’s Park. This is dome shaped red brick structure, rendered in flints, quartz and concrete. In some reports called a grotto. Others might confuse it with an ice-well. However, it is a very small one if it is any of these.  As water flows from the site, it clearly is a well and digging deeper a name can be found Jacob’s or the Wishing Well (TQ 435 880). The report by Oxford Archaeology survey (http://archaeologydataservice.ac.uk/archiveDS/archiveDownload?t=arch-841-1/dissemination/pdf/oxfordar1-58853_1.pdf) notes:

“The well retains water and there is an opening within the side of the structure c.0.75 m wide by 0.9 m tall, beneath a rough segmental brick arch. There is a metal grille fixed over this entrance although this appears to be of mid 20th-century date and is presumably a secondary alteration for safety reasons since the area became a public park. The opening has a stone sill. The internal faces of the structure are of brickwork although this now has extensive algae colouration….. The cement mortar used with large grit inclusions suggests that the structure has undergone considerable repairs since the park was purchased by the council in 1924. The condition of the feature is poor and it has suffered from the misguided use of cement mortar in the repairs. In areas this has cracked and come away from the main structure to reveal patches of the brickwork behind.”

An early report records by G. E. Tasker, Ilford Past and Present in 1901 notes:

“(The well) stands by itself in the grounds, protected by an alcove of bricks overgrown with ivy. The water is clear and runs off with a strong current through a pipe into a pond. This well has never, so far as is known, been frozen over, even in the severest winter, but during sharp frosts it gives out a steam or vapour.”

The account suggests that the spring was a thermal one, although I have found no evidence to support this. What is more interesting are the traditions associated with it. 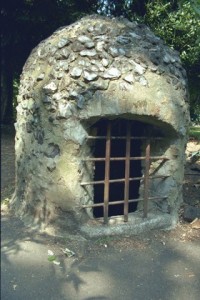 Much frequented in the 1920s a number of wishing rituals appear to have developed around it. Of which A Smith (1959) in Some Local Lore Collected in Essex in Folklore notes:

“For the last fifty years at least the well has been known among children as a wishing well. The ceremony was for a child to go to the well alone, throw in a small stone, and make a wish. Today children sometimes scratch a wish on a laurel leaf and throw that in. Whether the well is old or new, we have not been able to ascertain. The tradition about it is, however, strong.”

Scratching a wish on a leaf is an unusual activity and I have found no other such rituals. Another account, recorded by a Dr Raine about the pre-1914, recorded in http://www.valentines.org.uk/valentines_park/about_us/newsletters/vpcn14.pdf mysteriously reports that in the early part of the twentieth century a bent pin would be thrown in and that it this had something to do with ancient Egypt but what that was is unclear!  Again very curious. 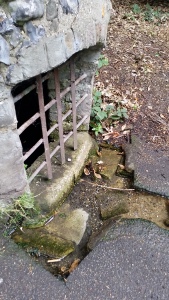 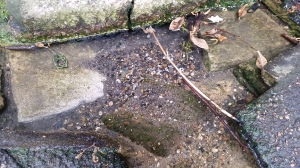 The park was enclosed in the late 1600s so it may preserve an old holy well but this is only speculative. Interestingly, fifteenth century records that Stephen Atte Well, nearby suggesting possibly a hint at an important spring or stream in the location.

The brick work does certainly appear quite old, but I have been unable to trace a date. The estate was landscaped in the early 1720s by a Robert Surman which is highly suggestive of a non-holy well origin. The fabric being the same as a nearby grottoes and alcove. It first appears in on a 1854 Estate Plan.

The name Jacob is not promising for supporting a holy well of any age. Although some have identified the name as vulgarisation of St James, the name is too frequently encountered at sites associated with folly wells such as Jacob’s Well at Hagley Hall, Worcestershire and that in Grosvenor Park, Cheshire – both dubious in their antiquity.

Whatever its origin, since 2009, the little Wishing well is looking a lot better than when I first remember it back in the 1970s and the restorations and improvements are much to be commended. 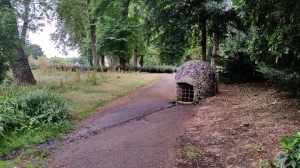