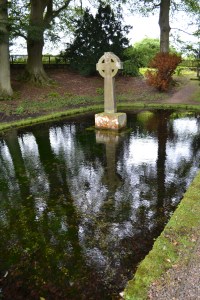 So reads the inscription at one of the country’s most famous and picturesque holy wells…but what is the truth?

The most beautiful fountain….

Taking the lane up from between the houses and the side of the farm, climbing over and stile and into a pastoral landscape, ancient oaks lie to the left and a small babbling brook, moving away at great speed as we follow this the enclosure of the well is ahead of us. Here laying in this peaceful enclosure

Whose well is it?

Three names appear to be attributed to the well – Lady, St Ninian and St Paulinus. Which is the correct one? Certainly the later was current in John Warburton in his 1715 History of Northumberland describes it as:

“Paulinus’ Well, a very beautiful fountain in a square figure, length 42 feet and 21 foot in breadth; wall’d about with a curious stone resembling porfire, paved in the bottome and incompos’d with a grove of trees and at each corner thereof the foundation of a small [illegible]. Out of the well floweth a stream of water very cold, and clear as christall, and if cleaned out would be a most comodious cold bath and perhaps effect several cures without a marvell. At the east end lyeth a stone 3 foot in length and 2 in breadth called the holy stone, said to be the same whereon the forementioned bishop kneeled at his baptising of the heathen English; and was formerly held in great veneration by the gentry of the Roman Catholick religion who oft-times come here on pilgrimage.”

This association with St. Paulinus is easily explained. Although Bede descrived the conversion of 3000 this was misread by John Leland as Sancte Petre (holy stone )but it was Sancti Petri – St Peter’s Minster, York…an easy mistake but one which then enters as fact into Camden’s Britannia and consolidated over and over again! This was further endorsed by as William Chatto (1935) notes:

“a stone figure, intended for Paulinus, which was brought from Alnwick in 1780.”

The name Lady’s Well is also easily explained there was a Benedictine priory of Holystone which was dedicated to the Virgin in the 13th century and either their name was transferred to or else they renamed it. It was probably the former as the a signboard was first seen by a William Chatto seen in 1835 is the first to call it ‘the Lady’s Well’ and it appears on such on the 1866 OS. Hall (1880) calls it ‘St Ninian’s Well’. By the time of Butler (1901–2) all three names were in use, as he says that:

‘the beautiful well at Holystone, known to us as “The Lady’s Well”, described… as“The Well of St Paulinus”, was formerly “St Ninian’s Well”’

“a spring of beautiful water in a grove of fir trees a little north of the village. The well is a quadrangular basin within a neatly kept enclosure; the key of the gate can be obtained at the Salmon Inn… A stone statue of an ecclesiastic, originally brought from Alnwick castle, formerly stood in the centre of the well, but a few years ago this was removed and placed at the west end of the pool, and a cross of stone bearing the following inscription substituted: “+In This Place/ Paulinus the bishop/ Baptized/ Three Thousand Northumbrians/ Easter DCXXVII+”’. 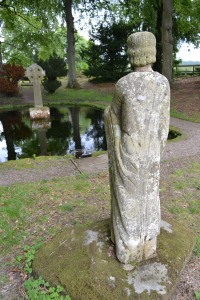 “At the bottom, visible through the pellucid water, Dr Embeton informs me he has formerly noticed many pins lying.”

“now a wishing well, into which crooked pins or occasionally pence or halfpence are thrown.”

No pins can be seen in its waters although they would be hidden by the leaves and perhaps the sign which notes:

However, beside the saint’s statue laying at his foot is a small hoard of modern coins and so perhaps starts a modern tradition. One wonders what happens to the money? National Trust? Church or local landowner?

All in all despite its duplicity with names and dubious origins sitting in the arbour of trees and peering into that clean beautiful water in this remote location you are divorced from the modern world and its modern problems…and if for that reason only Holystone’s special spring is worthy of a top ten for anyone.