An abecedary of Sacred springs of the world: Portugal’s Fonte do Ídolo Braga

In Braga can be found a fairly unique sacred spring called the Fonte do Idolo or Fountain of the Idol. Often it is claimed that springs have a pagan origin but little evidence of it can be seen. Here is a rare example of such a site.

The fountain flows from the base of a three metres wide and 1.20 metres high granite structure upon which is a carved human figure possibly a male with a beard dressed in a toga who appears to holding some undecipherable object in ‘his’ left arm possibly a cornucopia. Above appears a Latin inscription, CEL) ICVS FRONTO / ARCOBRIGENSIS / AMBIMOGIDVS / FECIT, which can be translated by “Celico Fronto, of Arcóbriga, Ambimógido fez (this monument) and to the right of the figure is a rectangular building cut into the rock with the worn figure of a human head, crowned with a triangular pediment engraved with a dove and a packet and other Latin inscriptions are engraved into the shape’s side. At the base of this niche sprouts a small spring.         .

It is the combination of the carvings and the Latin inscriptions which makes the site of significance indicating they date back to the era of Emperor Augustus in the 1st century.

What does it represent?

In 1895, archaeologist Jose Leite de Vasconcelos visited the garden where the spring was found and completed a study examining the inscriptions, although they had been encrusted in lime and deciphered the inscription to read re- TONGOE and hypothesized that the human figure on the left was the religious practitioner and the image within the structure the divinity. Now it is clear that the inscriptions read: CELICVS FECIT, which follows in the lower part of the niche : FRO (NTO), that is the name of the dedicator. To the left can read the name of a deity: TONGONABIAGOI.. In 1980-1, archaeologist Alain Tranoy examine the image and thought that the images were reversed in what they showed. Finally, António Rodríguez Colmenero firmly established the fact that it was two deities, a plural sanctuary and that it represented Tongo Nabiago and Nabia. Part of the Lusitanian divinity, that is indigenous indo-european people of western Iberia who were typically adopted by the Romans once the area was colonised. . 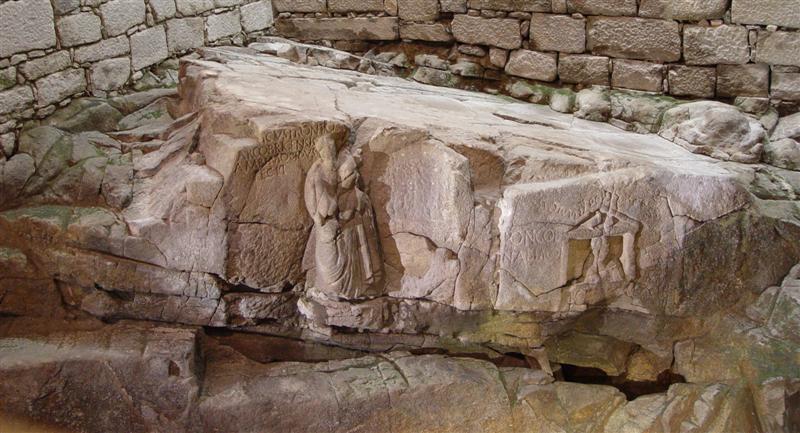 The site was first marked in modern time on a map of the town from 1594 by Georg Braun and by 1695 the land was owned by the vicar of Sao Joao de Casteloes suggesting it had been adopted by the Catholic church and indeed a view was that it was Bishop of Urianópolis, Alves de Figueire who made it. Its first written description was in the 18th century, when the accountant  Jerónimo Contador de Argote, noted in his records that:

“behind the church of São João Marcos is a garden, that is called “Idol”, in which is located a deep spring, which has a rock, which appears to be living rock, with a figure in long robes, that is five palms [in size]: it looks like [the figure] has a long bear, and part of his body is missing; his right hand is broken and on the left the form of a envolotório, and above the head there are letters…”

Much of the writing was obscured by encrusting lime. In 1862 King Pedro V came to examine the site and it was offered as a gift by its then owner, to be placed in a museum in the grounds of Quinta dos Falcoes, but it never happened and after going through several owners in 1936, the municipal government of Braga, acquired the land surrounding the fountain and it was then transferred this title to the State the following year, with repairs in 1952 and then in 2000-2001, a modernist building was constructed over the site with interpretation signage. Its future being secured as perhaps the most important ancient healing spring from the pre-Roman period in Europe.